The light has just started slipping down the sky and the sunset over Wales is opening out in to the most beautiful array of colours.

I've parked at The Bog visitor's centre, a lovely little former mining village that now is a tiny hamlet on the edge of the Shropshire Hills. The Shropshire Hills are wonderful because while they have some of the wilderness and feel of other national parks in the UK, by being slightly lower they are far less visited and the evening I've come to Stiperstones there is a beautiful stillness over the village of The Bog.

Stiperstones is part of the group of hills in Britain known as Marilyns, hills with a 150m drop on all sides. Amusingly they were named Marilyns by Alan Dawson in his 1992 book The Relative Hills of Britain as a counterpoint to their Scottish mountain cousins, Munroes. Marilyn. Munro. Get it?

From the main car park, you cut across a field slowly climbing until you hit The Shropshire Way, a bridleway that climbs through punchy pockets of heather before opening out on to a glorious long ridgeline with multiple forked up quartzite stones. These jagged outcrops in total run for an incredible 5 miles causing a dramatic summit for its modest 536m. One of these outcrops is even poetically named Devil's Chair.

As you open out on to the summit ridge you see in the distance one of the most remarkable placings of a trig point ever: on the highest jagged quartzite, known as Manstone Rock, amazingly a trig has been cast at the very top. A scramble to the top later and you can cling on to the narrow depression in the centre and lean back in to nothingness. 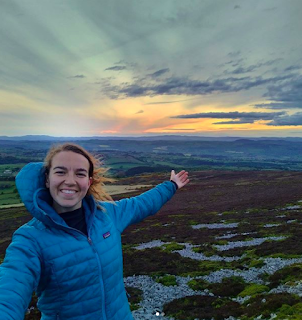 The night in question I scrambled up bravely, thinking myself somewhat impressive in the half light of the evening. After I'd summited and gingerly made my way back down, through the twilight a fell runner came peeling out of the skyline and after a swift acknowledge of "Evening" threw himself up and back down in less than 10 steps. It rather put my cautious clamber to shame. But locals loving their hills has always been one of the joys of a truly great summit: loved by many, in many different ways. Loved through seasons, times of day, stages of life. The mountain is always there for you when you need it and no matter how you arrive or depart. 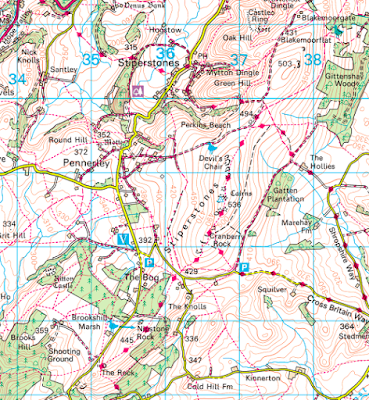 "They came at last, trotting in file along a narrow track between heather, along the saddle of the hill, to where the knot of pale granite suddenly cropped out. It was one of those places where the spirit of aboriginal England still lingers, the old savage England, whose last blood flows in a few Englishmen, Welshmen, Cornishmen. The rocks, whitish with weather of all ages, jutted against the blue August sky, heavy with age-moulded roundness.
[...] At length they stood in the place called the Chair, looking west, west towards Wales, that rolled in golden folds upwards. It was neither impressive nor a very picturesque landscape: the hollow valley with farms, and the rather bare upheaval of hills, slopes with corn and moor and pasture, rising like a barricade, seemingly high, slantingly. Yet it had a strange effect on the imagination."
St Mawr, D H Lawrence, 1925 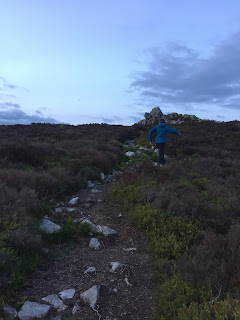 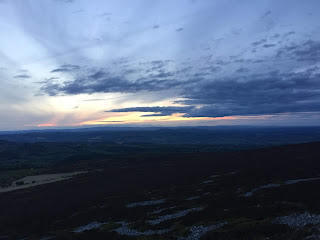 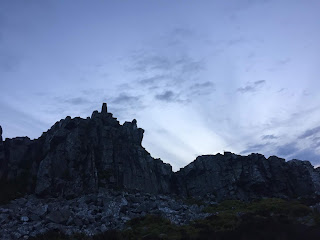