It is less than a week before Christmas and the guy at the Youth Hostel reception desk is looking at me like I'm nuts. "You want to go over Crib Goch?" he repeats, "At this time of year we'd only recommend that for people who really know what they're doing, you know, people who've spent a lot of time in the hills." This should annoy me but actually it makes me laugh, what does a person who spends a lot of time in the hills look like? I'm evidently giving off the wrong vibe as I hold my beer and quiz him in the bar the night before my planned ascent.

I love the idea that people think hill baggers are still 'anoraks'. Obvious in the daylight. I continue to shock new friends that I can bore them for hours with my supposedly needless trivia about trig points. I confirm to the guy on the front desk that I definitely fall in to the camp of "know what I'm doing", hence the quizzing. "I'm just trying to ascertain how much ice is up there: is it crampons and ice axe kind of weather or not? Happy to carry stuff I don't need just in case just thought I'd ask your opinion." I then find out the route of the problem: he's not actually been over Crib Goch himself. Ever. 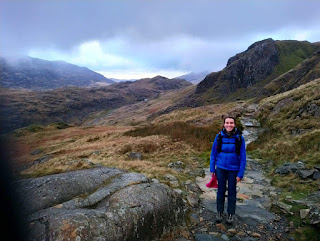 There are many routes up Wales' highest summit, Snowdon, and many are wonderfully friendly to beginners. Personally my love of the hills doesn't involve snaking up behind hundreds of other hill walkers so for me the natural route of choice is Crib Goch, in deepest winter. On the 20th December I make my bid for Wales' summit. Heading out of the YHA which is happily perched at one of the highest starting points for Snowdon, Pen-y-Pass, this crisp morning leads the valleys around me to be lit with the most phenomenal ethereal light while clouds trap the sunlight above me. I follow the easily marked Pyg Track until it splinters off to it's much unfriendlier elder brother of a route, the Crib Goch climb.

Crib Goch is a knife-edged arête which translates as 'red ridge' in Welsh. As I slowly pull myself along the ridge I'm delighted that while there is fresh snow, there is no ice making for really enjoyable climbing. On the day I'm there the ridgeline opposite, along with the famous Miners Track and the lake, Llyn Llydaw, keep swelling in and out of the mist and I feel like I have been lost to a dream world. It is believed that much of J R R Tolkein's vision for The Lord of the Rings came from the time he spent in North Wales and you can see why. For hours I see no one, which surely is not a statement many can say on their ascent of Snowdon.

Once over the knife blade of Crib Goch's summit, the kind-of-path threads it's way onwards before curving over Garnedd Ugain's trig point and continuing round to the left and the giant of Snowdon makes itself known with the surprising path convergence of my route and the railway line. There are no trains at this time of year and a smattering of other walkers pass cheerily but with hurried pace as the chill has started picking up and it has begun to snow. The mountain is reminding me that winter is here. 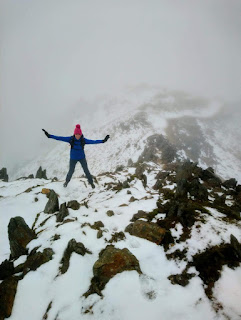 At the summit itself I gaze longingly at the cafe and dream of hot chocolate I could buy on days other than a wintery December before climbing the final twisting stairs that lead to the trig point itself. This trig is of special significance, as the highest point in Wales it was crucial in the triangulation of 1802 that led to the first accurate map of Wales by the Ordnance Survey. The Surveyor's work on top of the mountain, using a 200-pound theodolite they had had to carry up the mountain, was hard going due to the tapered nature of the summit but the discomfort they faced in triangulating from such a point was offset by the view, described by a witness at the time; 'Snowdon lies right in the centre of the British world, and commands from it's summit, views at once of England, Scotland, Ireland and Wales, and of the intermediate islands of Anglesey and Man.' (This quote is taken from Rachel Hewitt's wonderful Map of a Nation: A biography of the Ordnance Survey). 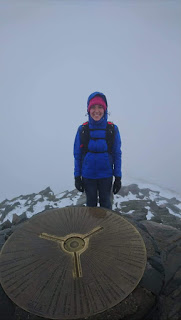 The view from Snowdon (1085m) has the potential to be as astounding today but on the day I reach the summit I'm nearly blown off sideways by the snow that is now attempting to lodge itself in any crevice I have failed to cover with waterproofing material and the sky is a thick white of snow drift which doesn't lend itself to great views. I quickly skim off the summit and head South down the Watkins path to cross the summit of Y Lliwedd. This amazing ridge line gives views back of Snowdon and Crib Goch that make this longer route down worth the effort and I eventually drop back down on to the Miner's Track which feels like a motorway compared to some of the paths I've ventured on today.

The Miner's Path drops me back off at the Youth Hostel and inside I order a whisky from the same guy at the reception desk. He's slightly impressed and slightly surprised by my order but as I settle down in front of the roaring fire of the hostel bar and pour over The Mountains of England and Wales (Volume 1: Wales) by John and Anne Nuttall I think he starts to realise that underneath my rather sheep-like appearance, an anorak of a wolf lies. 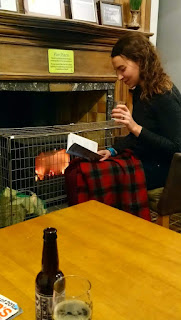 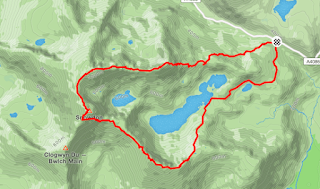 "A week ago, when I left home,
I little thought that I should come
To Snowdon's châlet - thence to see
The sun in heavenliest majesty.
Moonlight and mist at night-fall threw
A veil o'er all; - one argent hue
Enclos'd the earth, while far above
Gleams of a brighter world of Love
Wafter the soul beyond the sky,
Far, far, into Eternity!
But when the morning broke, and day
Once more resum'd his brilliant sway,
I saw - but words can never tell
That fire-line on the horizon creeping! -
At once upon my knees I fell,
And, for my very joy, much weeping!"
Written on the Summit of Snowdon, September 11th, 1845, Rev Henry Wellington Starr, 1845
Tragically, on the Rev Starr's second ascent of Snowdon in 1846, he had an accident on the descent. The weather had been poor and he'd chosen to climb alone something rarely done at the time. His body was discovered by a huntsman in 1847.
Labels: hill bagging Marilyn Nuttall Trigs