I'm standing on top of an ancient volcano in the middle of the second largest city in Scotland. Arthur's Seat is a glorious central hill summit with fantastic views over the city and out to the sea.

At 251m this sleeping giant is a must do while visiting Edinburgh. I find myself in Edinburgh every August for the Edinburgh Fringe Festival, the largest arts festival in the world and I will at least once every summer therefore make the ascent to the top of this sleeping giant.

Arthur's Seat sits within Holyrood Park and my favourite ascent involves tacking on a climb of Salisbury Crags as well.

Starting at my favourite arts venue (which also has a fantastic cafe) Summerhall on the edge of the Meadows, I make my way down the majestic former fronts of Edinburgh's beautiful old houses on East Preston Street passing the old Commonwealth pool as I continue down Holyrood Park Road. I've snuck out at lunchtime in the middle of a busy festival day packed with seeing shows and the festival atmosphere spills on to the sunny streets with music and laughter filling the buzzy atmosphere. While there are many things to adore about the fringe festival, the overwhelming volume of people is not one of them and I start to break in to a jog as I hit Queen's Drive, the circular road and footpath that runs around the edge of Holyrood Park. I head away from Arthur's Seat itself, skirting the park to the left first and watch the looming Salisbury Crags rise to my right as I leave behind the crowds and the noise. As I pass the Scottish Parliament on my left I start to hug Salisbury Crags following Volunteer's Walk before turning almost a complete U-turn to start to follow the line that takes you directly over this summit.

As I start to hit the expanse of cliff that forms the Crags I am hit with my first really proper view of Arthur's Seat rising up to my left. I follow the Crags all the way over to rejoin one of the main ascents to Arthur's Seat itself, Pipers Walk. In 1778 soldiers from the Seaforth highlanders mutinied in this very spot and the regiment's piper paced the path playing hence the name. Today I can make out some of the pipers playing for tourists back in the centre as I follow the curling path up towards the summit, my run now reduced to a walk due to the gradient. As you hit the summit itself there is a final scramble to get to the top and my quiet escape suddenly finds me once again surrounded by tourists, selfie sticks in their hands throwing quizzical looks at my heavy breathing and even heavier running style. 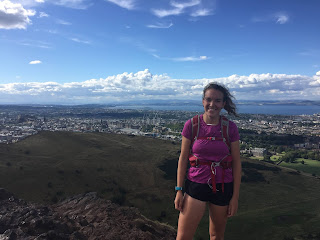 I climb the final few steps to the trig itself from where you get the most amazing 360 degree view all the way over to the sea and beyond. I quickly touch the trig and I'm gone, flying down the most direct route, heading East towards Dunsapie Crags down the grassy slope that eventually leads me back on to Queen's Drive. Heart pounding I slow down from a wild fall to a gentle jog, as I skirt Holyrood Park once again on Queen's Drive before exiting the park the way I'd come. Back at Summerhall I'm salty and sweaty and shot with even more quizzical looks as I queue with my running rucksack for the tiny bathrooms. I'll change from my secret hill bagging ways back in to an arts professional just in time for the next show to start: heart full once again of the joy of the hills.

"I visited Edinburgh with languid eyes and mind; and yet that city might have interested the most unfortunate being. Clerval did not like it so well as Oxford; for the antiquity of the latter city was more pleasing to him. But the beauty and regularity of the new town of Edinburgh, its romantic castle and its environs, the most delightful in the world, Arthur's Seat, St Bernard's Well, and the Pentland Hills, compensated him for the change, and filled him with cheerfulness and admiration."
Frankenstein, Mary Shelley, 1818 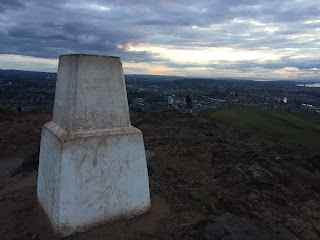