It's that wonderful time of year again when the British weather toys us in to confusion as to what season it is. Summer for a few days, spring then suddenly winter again - my wardrobe gets terribly confused in May.

But when the Lido opened at Jesus Green in Cambridge last week I couldn't wait to get back in the water and embrace the fact summer was right around the corner. A lido is an outdoor public pool - a completely different experience to a leisure centre - and the one in Cambridge is a gem. One of the longest outdoor pools in Europe, Jesus Green Lido is a mighty 91m long - no repetitive 25m lengths here! As well as the great size, it has piping hot showers and, joy of joys, a sauna. Who could say no? 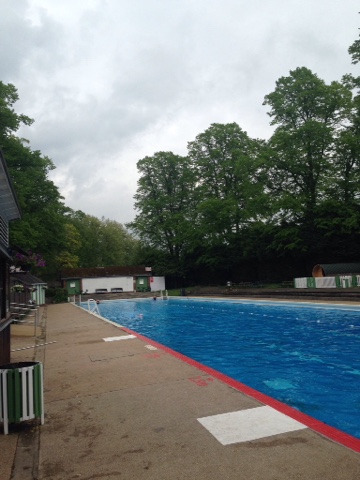 I may have been a bit enthusiastic on my first outing though - armed with only my Sweaty Betty bikini and a bright pink swim hat and goggles I'm all confidence until the speedster husband observes that most people are wearing wetsuits...and the water is 16 degrees. A very slow and unsure entry later and the calm but crisp waters are the most incredible deadener to the stress and chaos of life outside. Focusing just on my breathing and the long, long lengths the lido offers I make the journey slowly back and forth feeling great pride and freedom in my lack of wetsuit. By 8 laps, I'll admit, my toes had gone numb, at 9 I begun to get pins and needles and by 10 my fingers were also going numb. I make it to the magic 11 - making a kilometre of swimming and make a dash for the sauna which is delicious after the icy depths of the pool. As the blood rushes back to my extremities a man enters in not just a wetsuit but also neoprene hat, boots and gloves. "Bloody heck! Did you go in in just a cossie?" he asks. I smirk, "Just a bikini." Ah sweet, sweet pride. I feel like a mighty Norweigan warrior. Or one of the old ladies you see jumping in the Serpentine on New Year's Day in their flowery swimming costumes. Maybe somewhere in between the two.

Either way I'll be back. And I won't be in a wetsuit. 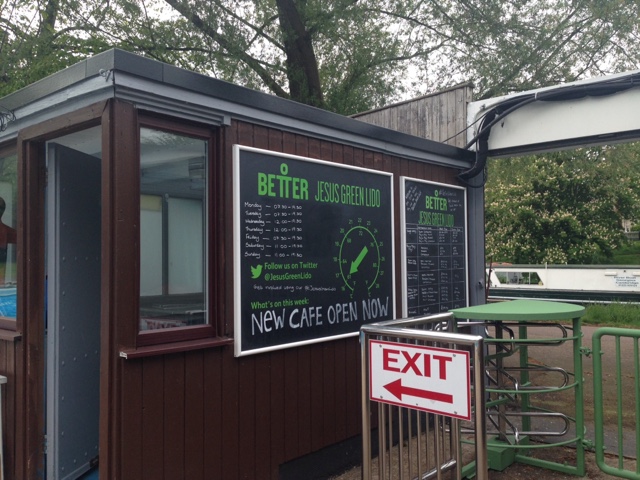 Two thirds of the way through this year's Cambridge Half Marathon, I received a text from the speedster that is my husband with a picture of him relaxing at the finish line with a beer. I, meanwhile, had 7 kilometres left to run. When someone explained to me therefore there was a race where you made the speedsters run for longer than those us less athletically gifted I decided I had to take part.

Wings for Life World Run is a race with a moving finish line - 30 minutes after the race starts, a car chases down competitors and when the car passes you your race is over. It's quick too - you'll need to run 1:30 to get to 15km or a 1:52 half marathon to survive. Once caught, you are bused back to the start to watch the event ahead unfold on giant screens. The pros make it to 80km plus, 55km plus for the women, and run circles around the rest of us in the process. Oh and did I mention it takes place in 12 time zones around the world simultaneously?! So you race not just against the competitors in your physical race, but also against the global competitors running in varying conditions - from the middle of the night in Japan to the middle of the desert in Dubai.

Mentioning the desert of UAE seems an appropriate place to start talking about the British race. After Silverstone last year, the Wings for Life World Run had moved to Cambridge this year starting in the city centre then running out to the villages. The only problem when the competitors showed up this year for our 12noon start was the weather: 25 degrees, blistering sunshine and not a cloud in the sky. Lovely if you are planning on going swimming, not so great if you're trying to take on an endurance running race. My visions of smashing a 1:52 half marathon quickly dissolved in the sunshine in to two new aims: 1. don't pass out and 2. try and get to 15km.

Race HQ was really well organised - my congrualtions to the fantastic volunteer team including the fab Chris Darling. Race number collection, toilets and bag drop were well organised and timings planned to get everyone through easily before the start of the race. The start line was fun although I was pretty shocked to find myself so near the front in the pens. I'd presumed I'd be aiming for a top 250 women place but I'd been penned much higher. Cheers and great commentary plus a wave from David Coultard, driving the chase car, saw us off at exactly 12 noon with the screens in the background showing us clips of the other races around the world also kicking off.

The first 7km was great, I was pacing like a champ, easily on course for the half marathon. And then the sweltering temperatures kicked in and it all went to pot. Water breaks were only every 5km which in such high temperatures I found tough so a special mention to the incredible locals lined on the route who had got their hose pipes out and were spraying runners - I really think they saved lots of runners from heat stroke.

I found a new lease of life at 13km as I made it to Cottenham and got cheered on by friends from parkrun having a BBQ on the side of the race course. By the time I hit 15km I was convinced I was about to be caught but a quick check at my watch revealed I was 8 minutes ahead of the car. A quick recalabration and I decided hitting 16km in 2016 seemed like a good target. When the car finally caught me up I managed a long sprint finish - finally allowing it to pass me at 16.83km. Further up the course the speedster husband was still racing - eventually making 24km of him 30k target. A sign that the weather impacted on all of us today.

On the buses on the way back we all joked and laughed that the half marathon had seemed totally achievable until the weather had its way but that made it all the more fun - the challenge of what you can achieve next year and the constant need to alter your expectations.

Back at race HQ I settled down in a deck chair with my hardly fought for finishers tshirt and medal to watch the world race unfold on the big screens. Being able to watch the pros fighting on the same course that has just pushed you to your limits is an incredible premise for a race: it's empowering and inspiring and it's great to combine being a competitor with being a fan. Several hours later we dragged our aching muscles home for cold showers. What an incredible race and an incredible day!

To sign up for 2017s race - again in Cambridge - go to www.wingsforlifeworldrun.com
Posted by Fiona at 09:06 No comments: