Where does an ultra become a road race? A road race an ultra? Road marathons are brutally tough I believe for two reasons that separate them from the equally tough ultramarathons: they are run on unforgiving road and people care about times (not all people I accept but as a sweeping statement: us runners have some concept of time in road marathons).

When I talk to people in the UK about the fact I run longer than marathons they tell me I'm daft. By comparison when I say even the words 'I like running parkrun' to a South African they ask when I'm going to do the Comrades. On the start line of Two Oceans this weekend, another runner couldn't understand why Comrades seemed too far for me. 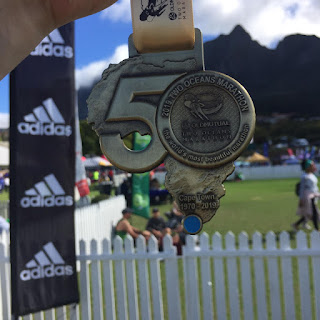 The South Africans are also particularly nutty about running certain times in their ultras. So many people congratulated me post-run on 'getting the bronze' - the medal awarded to runners who run between 5-6 hours (the gold is sub-4, silver sub-5 and blue for 6 hours+). This interest in times is something I'm just not used to when it comes to ultras. One of the main reasons I enjoy running past the marathon distance is because times don't matter anymore! So to arrive in South Africa and people ask what time I was aiming for was a bit of the shock to the system.

I'm a great fan of beating cut offs by a comfortable distance. This year the cut off of the Two Oceans got extended by thirty minutes to 7:30 so I plumped for 7 hours. I also text my coach though to say I'd really like to be under 6:30 as that would have been the sub-30 minutes goal from last year. But in the back of my head there was a little voice asking if I could go sub-6. 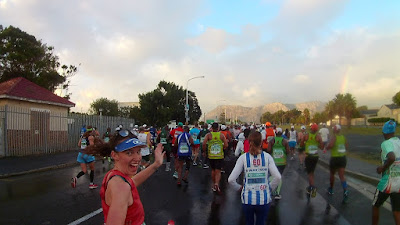 Race day was wet which as a Brit I was delighted about. The thing I'd been most scared about was the heat so downpours just served to cool down the day. The seeding pens were crazy - like the start of a major marathon but with no space thanks to the rather daft rule that your time is based on gun time not chip time ie. it doesn't matter when you cross the start line, even if that is 10 minutes after the elites start, the starting time of the race is everyones starting time. I was with the Speedster and one of Adidas Runners brilliant international community member, Johannes from Zurich. Two minutes after the miniature cannon (yup, I said cannon) was fired we were over the start line. The race starts at 6:40am so the first 40 minutes or so were run in the gloom before the sun was up. We were having a lovely time chatting and looking out for the 'blue numbers' worn by those who've run over 10 Two Oceans marathons. We had some great chats with some of the really impressive veterans and the miles just ticked away. 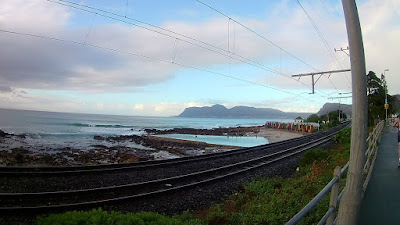 I wasn't necessarily planning on running at the boys pace but it felt comfortable on the day and I knew from 25km it would be very hilly so I may as well put in a good stretch until that point. About 12km the sun came out and we had the most gorgeous view of Table Mountain and were even treated to a rainbow. At 16km you hit the sea at the beautiful Muizenberg, a favourite hang out of the surfing community, and Graeme and I hoped on the 6 hour 'bus'. I love South African slang it's so fun. Apparently pacing groups are known as buses and pacers as the bus drivers. The spirit of these buses is on fire. The guys at the edges see it as their job at the water stations to get enough for everyone and pass it out, there is singing, chanting and just a great feeling of joy. 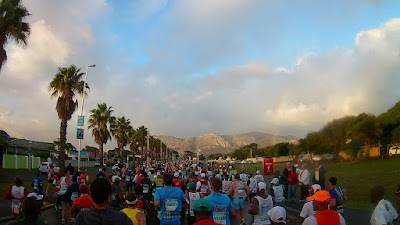 Johannes met a friend about 16km on the course so the Speedster and I pushed on and by the turn inland at 21km we were in front of the 6 hour bus feeling strong. Due to rioting in Hout Bay, the well known and loved route over Chapman's peak had been swapped for an eye-watering climb up Ou Kaapse Weg. The altered elevation chart speaks for itself. 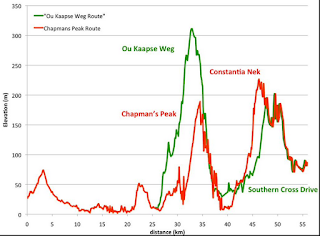 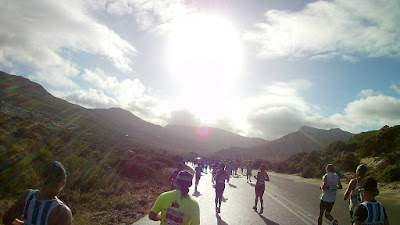 On the way up Ou Kaapse Weg I was pleasantly surprised to find I could run quite a bit of the mind numbing slow climb. It's 7km long so it's a killer if you choose to walk it all. Now a couple of ultras in, I've learnt that walking is a brilliant option if you adopt a run-walk strategy. Mine is always 60 seconds run, 20 seconds walk with the option to count again on either section. The views through Ou Kaapse Weg were beautiful, wide rolling mountains and then the peak comes and the valley opens up ahead of you and the climb is over. It's a really special moment. 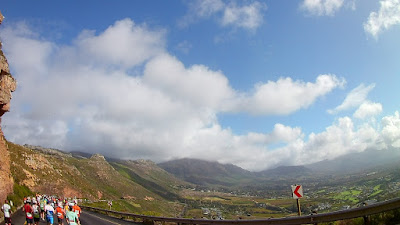 By the bottom of the main climb I was feeling pretty spent so I said goodbye to the Speedster and continued at a slightly gentler pace. I wasn't ready for the rolling hills still to come or the unforgiving camber on some of the roads that couldn't be escaped. I sadly saw two runners fall heavily on the cats eyes in the middle of the road. When you're tired it can be hard to look out for small obstacles. Once we passed the marathon point I struggled mentally even letting myself have a little cry at 43km. Pounding pavements is hard! 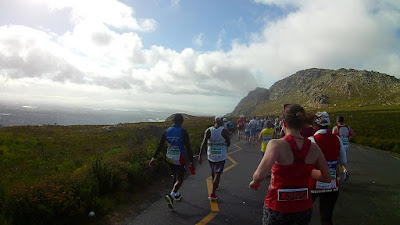 At 48km there is the smallest of switchbacks (400m) and as I hit the start I saw the Speedster ahead of me at the end of the switchback! I probably shouldn't have shouted hello because I reckon I would have caught him if he didn't know I was hunting him down! Seeing the Speedster gave me real energy and from 48km it was about counting down the kms one by one. 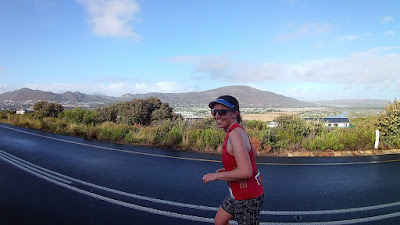 Food wise the course was really poor - I'm grateful to people who'd warned me of this as I took gels with me - there was one station with potatoes and one with bananas and that was it. The ice cream that was famously on the course at the marathon point in other years was nowhere to be found. Drink stations were brilliant though with plenty of water, coke and powerade to see you through all served icey cold. 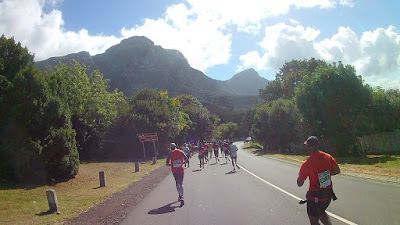 The last 3kms are a pretty mind numbing grind along the motorway back to the university which was tough going but the final run downhill on to the cricket pitches was really special. There were a huge amount of spectators and the atmosphere was electric. Crossing the line was really special and I was delighted to finish in 5:51:48.

Worth the pavement pounding? Absolutely. Would I want to run a road ultra again? Absolutely not! 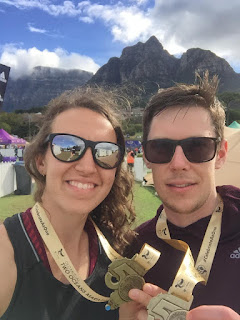 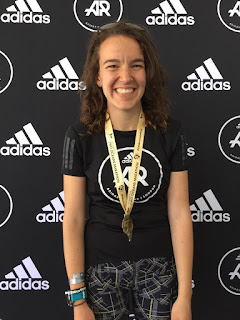 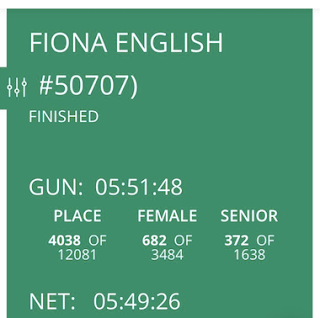