Just 6 days before Christmas, I had managed to persuade my Dad to take an impromptu trip to Wales, thanks to some annual leave I swiftly needed to use up before the end of the year.

While I've spent time in the Brecon Beacons before, I had managed to miss off many of the major summits and was keen to explore some of the higher, but still not so touristy, tops. And so with that we drove deep in to the national park, parking at the Tafarn-y-Garreg pub and headed for an incredible ridgeline. 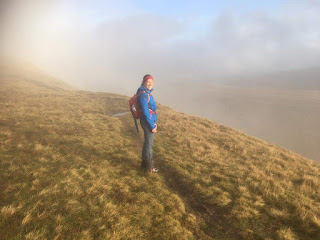 On a clear day, I am told the views from the Carmarthen Fan ridegeline are some of the best in Wales. I, however, was instead treated to misty rolling clouds, with occasional sunlight piercing through the clouds and sudden glimpses of the valley beyond.

That, and not seeing a single other person in our 6 hours out. And that, is why I love winter hiking. 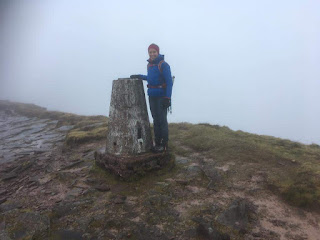 From the pub, for 5km we followed a wide uphill path that lead us to the ridgeline. From here, we followed the ridgeline over multiple tops: quiet Fan Hir bleeds in to Fan Brycheioniog, and the highest point and trig on this summit ridge (802.5m), before blending away in to Fan Foel. 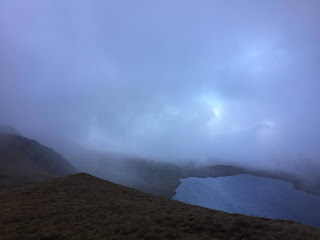 From Fan Foel, the path veers West leaving behind the glacial lake of  Llyn y Fan Fach, taking you down and back up before you hit the summit of Bannau Sir Gaer (known also as Picws Du) before dropping down off the ridgeline via the final summit of Waun Lefrith. 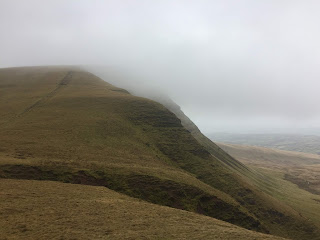 Mountains are temperamental things and as prepared as you might be, the weather can change in an instant. As we begun to descend off Waun Lefrith a sudden icy rain storm blew in and all the layers in the world could not protect us from the biting water that descended.

I'm a pretty decent endurance distance athlete because I'm fundamentally pretty stubborn and don't like giving in when things get tough. I get that trait from my father. And as such, we went traipsing off, leaving the comfort of the paths behind, through the now hail-storm in search of Garreg Las, a Nuttall which is characterised by two distinctive Bronze Age cairns on the summit. It's hard to marvel at a prehistoric pile of stones when you're being whipped sideways by icy blasts of freezing cold water though and we scarpered as quickly as we arrived.

Now with quite some pace, we headed back towards the valley and the rain that had fallen made the formerly easy to jump river crossings swell. As such, we were forced to wade through 7 rivers on the way back, the freezing December Welsh rivers getting the last laugh on our way down.

Suddenly the boggy, pathless monster of a route was transformed by the best Christmas present a girl could ask for: a wide, beautifully laid path. Bliss. As we plodded back dreaming of what we might order at the pub, we were treated to passing four wild ponies who looked more miserable about being out in the rain than I was. 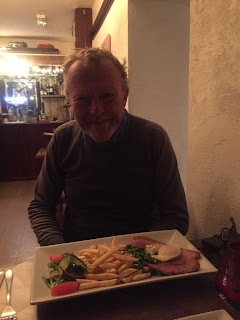 As we arrived back at the pub we threw ourselves in front of the tiny roaring stove and ordered a mountain of piping hot food. After a plate of gammon, egg and chips, a bowl of sticky toffee pudding and custard and a glass of red wine I began to feel my drenched toes again. Sitting in front of the fire, my wet clothing strewn about the fireplace, I was filled with such contentment that only a truly wild mountain experience can give you. Don't get me wrong: I love a beautiful sunny day with clear views and wide paths. But there is nothing like the raw, visceral, wilderness on an untameable day to make your heart beat faster and your spirit truly soar. 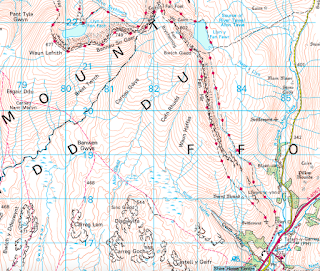 "High up in a hollow of the Black Mountains of South Wales is a lonely sheet of water called Llyn y Fan Fach.
In a farm not far from this lake there lived in the olden time a widow, with an only son whose name was Gwyn. When this son grew up, he was often sent by his mother to look after the cattle grazing. The place where the sweetest food was to be found was near the lake, and it was thither that the mild-eyed beasts wandered whenever they had their will. One day when Gwyn was walking along the banks of the mere, watching the kine cropping the short grass, he was astonished to see a lady standing in the clear smooth water, some distance from the land.
She was the most beautiful creature that he had ever set eyes upon, and she was combing her long hair with a golden comb, the unruffled surface of the lake serving her as a mirror."

The Lady of the Lake is a folklore story from the 13th century. The authors name has been long forgotten as the story has been passed down verbally through generations. She has always been associated with Llyn y Fan Fach. She appears also in the stories of King Arthur.