My father is without a doubt, one of the best hill walkers I've ever met. His passion for the hills has lasted since he snuck out of a school trip to 'nip up' Robinson in the Lake District at 16, to his now inspirational long weeks out in the remote highlands traipsing up and down pathless routes at the age of 70+.

In May 2019, my Dad planned a 30 day trip through the Highlands and I was fortunate enough to be allowed to tag along for chunks of time. While Dad was ticking off new Marilyns, we detoured a couple of times to allow me to tick off Munros.

A short history for you now on Munros: a Munro is any mountain in Scotland over 3,000 feet (roughly 915m) and the approved list is held by the SMC (Scottish Mountaineering Club). There are 282 Munros and a further 227 Munro Tops, lesser peaks of other primary mountains that are still over 3,000 feet.

We woke up on what has to have been the most perfect Scottish May morning: the sky was shockingly blue and the air was warm with no threat of rain. So we headed to the most northerly of Scotland's Munros, Ben Hope, a beautiful lonesome 927m peak set in the most incredible remote Highlands. 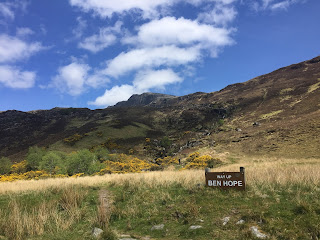 Parking at the bottom of the main route by the Strathmore River at Muiseal, I was bemused that a simple sign states 'WAY UP BEN HOPE'. Not one for a navigational challenge then. The route is cut beautifully in to the mountain and consists for a huge part in a series of almost steps, winding up past waterfalls and incredible rock formations gaining height quickly and easily. Once you leave the small river behind, the steps fall away to leave a more exposed flatter final ascent that weaves through spiky rock formations and up grassy slopes.

The problem with having such a fantastic hill walker as a father is that I, a rather fit 30-something ultrarunner, am often slightly shocked that I can't keep up with my pensioner of a father! He requires no breaks and just the occasional biscuit to keep him going. Our pace therefore up Ben Hope was enjoyably tough as this simple route gives you the full ascent in your legs thanks to starting at near on sea level. Up and up we climbed. 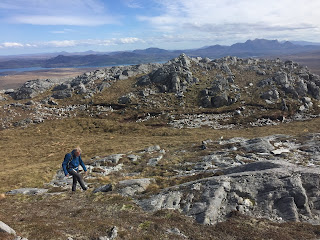 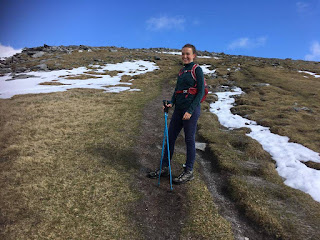 Towards the summit we were treated to beautiful snowy plains, thick snow crunching under our boots as we continued to gently snake up. As we crossed the final snow field, the summit trig poked out and as we hit the top itself the view to end all views opened out in front of us. Because Ben Hope is the highest point for miles, Scotland seems to open up before you - the weaving coast, the awesome sea, Cape Wrath to the North West, lochs dotted around and miles of rolling landscape. It is quite possibly the most incredible view I've ever been treated to from the top of a mountain. 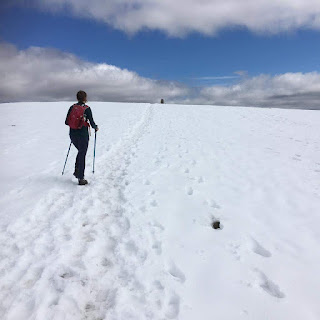 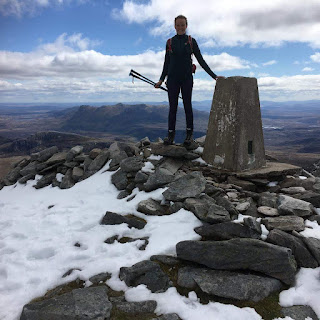 As it was quiet on the top, we ate our lunch while leaning up against the trig point before having to tear ourselves away from the summit to make our way back down the way we'd come.

If you are looking for views to take your breath away, Ben Hope is the mountain for you. 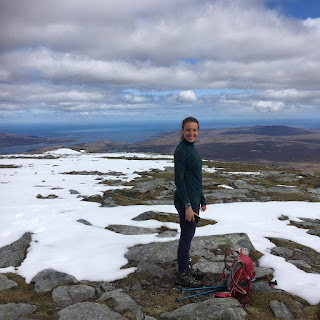 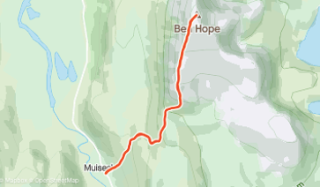 Syenite, mid-way between Granite and who knows what,
Proud above the Loch of the same name.
Jagged, distinctive multitude of rocky summits,
Each ideal to survey the wise expanse of flow,
Always the same,
The roaring stags of October are King here,
The true Loyal residents.

It was not always so, Ribigill, Mharraich
and Bronze age settlement so old no name remains,
but the circle in the moor and the clearance carins,
Speak loud in the silence,
Stone Rows, now buried in the peat,
Peak tentatively out at a world,
That no longer understands their meaning.

Hope springs eternal, smooth to the sunrise,
Optimistic above the loch of the same name,
Falling vertically and catastrophically towards the sunset,
Cliffs tumbling so far they will never end until,
You look towards sunset at the Wrath,
Where the mightiest cliff on the mainland stands,
And beyond Wrath there is nothing.

Crouching down on Hope, I brace myself,
Against the West wind from nothingness and Wrath,
And turn back to gaze upon the rocky security,
Of multi-headed Loyal,
I listen for the Stag's roar,
And await the next sunrise.