I am not sure why this post has taken me so long to write. I am sure that the Transgrancanaria Advanced race was the hardest thing I've ever done in my life. I am not sure how I finished looking back on it. I have never been more sure that I was going to drop out of a race to date. 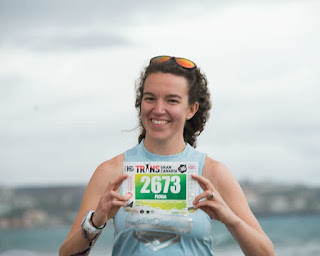 Gran Canaria has to be one of the most beautiful places I've ever been to in my life. The topography is simply remarkable: glistening white beaches, pine forests, snowy mountains, dry desert and sand dunes, wooded glades. It really is like nowhere I've been before. The opportunity to run through this inspiring island from it's centre to the beach was incredibly appealing. What an adventure!

Since Country to Capital, I knew the distance was going to be hard but some niggling plantar fasciitis that I just couldn't shift was making me pretty nervous as we flew out a week in advance. As soon as we landed I was in love with the sheer mountains and the vast plains. This was a true island experience. The run up to the race itself was glorious: we swam in the ocean, we hired road bikes and biked up a mountain we drank sweet coffees by the beach and we drunk sangria in the sunshine. As the days ticked down the nerves grew but I felt prepared for what lay ahead. A half marathon and then a marathon back to back. Through the mountains. I could do this. I'd trained incredibly hard. 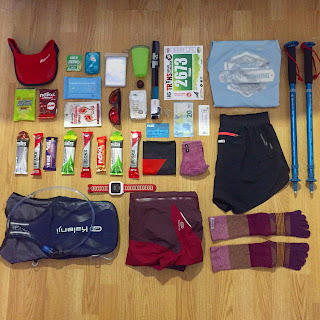 And just like that race day came and after a tedious bus journey winding up and up and up and up for what seemed like an eternity we were deposited high in the mountains in the beautiful village of Artenara awaiting the start of the biggest challenge of my life. 64km lay ahead of us and the air bristled with anticipation. 9am rung in the air and we were off. Just like that. A short run out of the village and we were instantly in the forest, sheer drops on one side and ragged climbs ahead of us. A bit of traffic across the first 5km or so and the brutal relentless climbing was already starting to have its impact by the first aid station. I virtually ran straight through as I'd just about found my groove and as we hit the highest point of the day, Roque Nublo, my heart swelled with pride: here I was, a normal runner, competing in this crazy mountain ultra. 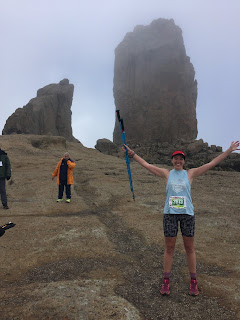 As the first hard descent came I felt slightly cockily confident thinking about fell racing in the UK and as my pace increased I got distracted for a split second and bam: rolled my ankle. Think like Joss Naylor, the great fell runner, keep it moving by running through it. Twenty minutes of white agony passed and by the time that major technical descent was over I'd rolled my ankles a further twice and kept moving.

Aid stations came and go and the volunteers manning them were just exceptional. It was quite the party atmosphere at most and the organisers had laid on a real feast: although I was only interested in the orange wedges, water and cola. As I reached the first half marathon, with a marathon to go, I remember being notably shocked at how exhausted I felt. My legs were already feeling pretty annihilated and I was only a third of the way in. No one said this would be easy. 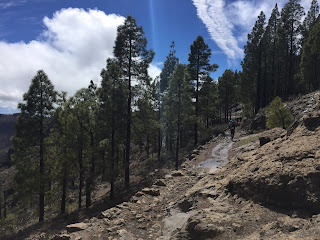 The views were literally breath taking. Every ten minutes or so it would feel like you had just clicked in to a new track of beautiful backgrounds and been transported to another incredible location. The views kept me going although the ability to see tens of runners streaming up and down ahead of you was mentally tough. There is something exhausting in being able to see the path ahead of you when the path involves so much ascending and descending!

At 30km I text my parents (mostly convincing them I was still alive) and they told me I'd now caught up with my husband the Speedster and he was just 20 minutes ahead of me. I was elated: this never happens! All the training must be paying off! And just 5km more of descending and something in my quads just gave in. And I was at quitting point. 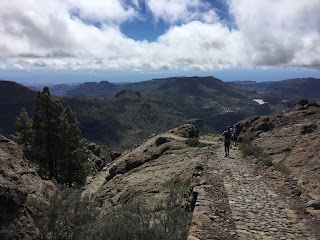 I'm not sure what did it but the relentless up and down hills certainly didn't help. Nor did the cobble-like surface we'd been running on for some time. Or the sun exposure. All I remember is at the marathon point I got my phone out and rang the Speedster, who, bless him, 5km-10km up the field from me answered, and told him I was dropping out. I've never got to that point. I was sure of it at that point - as I was exposed on the side of a wild mountain, I would get to the next aid station and then I would hand my bib number in and quit this stupid race. It was too hard. Too painful. And I just didn't care anymore. I was broken. And the Speedster told me he got it, he felt that way too. But before I dropped out I should get to the aid station he had just arrived at because they had paella. I bloody love paella.

So I ran for the paella. 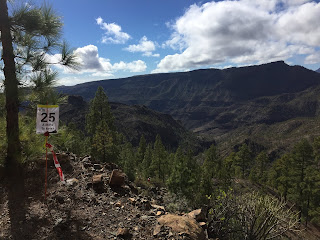 As I hit the paella station the medical tent deep-heated my thighs and, fuelled by salty rice, I thought I may as well walk out of the aid station and just 'be present'. Not worry about an hour ahead, heck not even worry about 5 minutes ahead. Just focus on getting through now. By this stage my thighs had officially given up and the painful hobble that constituted running was slower than a walk. So I thought of my incredible Mum, who at nearly 70 has chronic rheumatoid arthritis, scoliosis and has recently gone through nasty knee replacement surgery and still powers her way round Hampstead Heath parkrun every Sunday morning. And I thought: Well if Mum can do it I jolly well can. And so I started to route marsh down the bloody mountain. One. Step. At. A. Time.

I'd recced the final 10km of the course so when I hit the point of knowledge with the sun quickly setting it gave me a real boost. I could do this. Who cared if I power walked the whole way back or limped across the line. I was doing it. 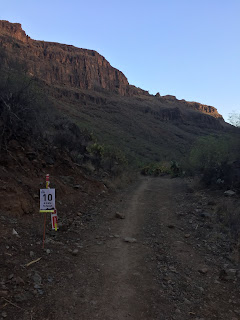 When I hit 8:30pm I admitted the darkness had won and got my head-torch out and put my back light on. And I kept plugging on. The ultra-marathon training guide I've been following is called 'Relentless Forward Progress'. I didn't care about splits, or running, or how slow I was. I just focussed on relentless forward progress. Keep plodding on.

When I started the day the dream was to not spend more than an hour in the dark. That somehow seemed like the mental barrier I couldn't surpass. So I had my aim: when the head torch went on at 8:30pm I had one hour to make it to the finish line.

And I gritted my teeth and just got on with it. I passed an aid station with 3km to go and was only just inside of my target. I shocked the aid station by flying through. I was determined now. The Speedster text me with 2km to go to tell me my wonderful, supportive, edifying crew: Advent Runners, was waiting for me at the finish line. 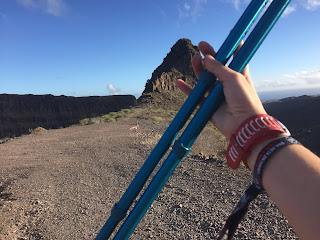 Texts from the Speedster. Texts from my parents. The thought of my crew at the finish line. Relentless forward progress. At one point we had to climb up and down a flight of stairs in that final 2km and I let out a loud sharp painful exclamation at the bottom step. This really was a new level for me of digging deep. My legs were in agony. My mind was broken. I felt defeated. But I was still moving forward.

The long straight to the finish line is glorious because you can taste the end. You know the release is coming. I forced myself to run, ignoring the waves of nausea that came from the pain. You round two corners before the finish funnel the noise, and pride, growing all the time. As I rounded that final corner I was just hit with the screams from my friends waiting in the night to celebrate me over the line. High fives all round and I ran over the finish line.

I remember trying to walk after that and feeling as though I would collapse. Or fall over. Or throw up. I remember wanting to cry. And pass out. And sleep. I remember a well of emotions flooding over me as the relief of it being over washed over me. And I remember repeating endless times 'That was so hard. So hard.'

The next day my legs were so wrecked I could only go to the loo by strategically falling on to the toilet. I couldn't walk up or down the slightest step without letting out a gentle whimper of pain. And it took me six attempts to get out of bed which, once successfully managed, I then proceeded to topple straight over again.

I have never pushed so hard in the face of what seems like - not a wall - but a cliff. But I ignored the cliff. I kept plugging on. I did it. I completed my first mountain ultramarathon: the brilliant, glorious, beautiful, painful, excruciating, exhilarating, annihilating Transgrancanaria. I couldn't be prouder of myself. Or more convinced that I never, ever, want to do that again.