In 2011 I did something that at the time seemed impossible: I completed the Edinburgh marathon. When I signed up for that race I couldn't run round the block so to reach the finish line was the most incredible experience. 5 hours 47 minutes and 45 seconds of pain and grit and determination.

Since that marathon, I have become a runner. I have discovered a natural passion and love of being outside and being free through running. But I have never run a marathon since that 2011 day. And so 13 days in to my brand new job at the King's Head Theatre I found myself having encouraged my colleagues that 'I truly believe anyone has the ability to complete a marathon'. Because, well I do!

Marathons are really tough. Completing one is inspiring. But genuinely, with training, determination and effective goal setting I believe anyone has the ability to run a marathon.

And so this weekend I found myself lining up at the start line of the Kent Coastal Marathon, organised by the incredibly friendly Thanet Roadrunners AC alongside 4 of my colleagues and 2 of our partners. 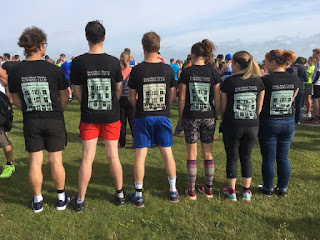 The course of the Kent Coastal Marathon is described as undulating. Which is always a worrying statement. 270m of ascent over 26.2 miles doesn't sound like much but as the miles click on the up and downs start to really hurt.

The first half marathon was wonderful. It was the perfect weather and the majority of the route hugs the beautiful coast of Kent taking you from Margate, through Broadstairs and down to Ramsgate before returning back to Margate. Then the most awful moment occured at the half way point. Over 3/5ths of the competitors stopped running. Because the half marathon starts at the same time on the same course as the marathon you have to watch as a huge proportion of the field peels off for the finish while you prepare for the second half of the race. Talk about mind over matter. 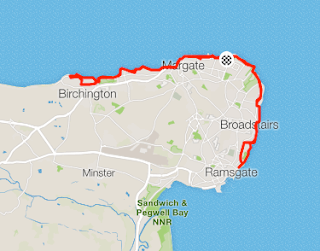 I was running with one of my colleagues James who is a particularly speedy half marathon runner but was running his first marathon in Kent after a really tough couple of weeks at work. When I first started running back in 2011 I was pretty embarrassed about how tough I found things and therefore hated running with other people but as I've become more and more confident in myself as a runner I've found that running companions can bring real joy to a race. Company, distraction and encouragement on hand throughout the journey. 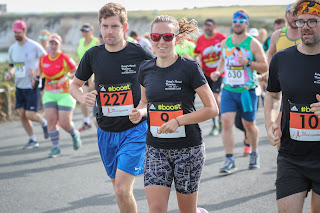 As we passed the halfway stage we both went a little quiet. It had just started to hurt and the fact we still had just over 13 miles to complete felt a little, well, gulp. From Margate you run along the busy seafront past beautiful beaches and beach huts to the turn point at Birchington. It was a beautiful sunny day at the weekend and the gorgeous weather, combined with the fact that my encouragement saw the wonderful Louisa, Oscar, Oli and James all taking part in their first marathon was pretty overwhelming. Running past my fantastic colleagues Bex and Alan cheering themselves hoarse on the sidelines was just so encouraging. It hurt so much at times but the company and the support of being with such a wonderful group helped spur me on. 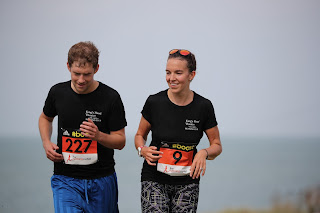 I had A, B and C goal set before starting the race, as I've now started doing for all races. Rather than saying to yourself 'I want to get X time' you set three goals based on your perfect race, ranging down to something you'll be really happy with. If it's your first marathon therefore your C goal might be: make it to the start line, B goal: finish no matter what the time and A goal might be finish in under 6 hours.

My A race of the year was Ironman so everything is a bit of a bonus now and my B race will come in 3 weeks time when I lace up for the Berlin Marathon so this was a bit of a check in point to see how running 'just a marathon' would feel.
So my goals were:
C Goal: PB! Finish in under the time I completed the marathon segment in Ironman (4:42:22)
B Goal: Sub 4:30
A Goal: Sub 4:15

As we approached a mile to go my watch ticked over to 4 hours. I turned to James: "What time had you been hoping for today? Sub-4:30?"
"That would have been incredible. Anything though. Sub-5 would be nice."
"We've only just hit 4 hours - we're going to do under 4:15!"

At this point I think James almost fell over. Running up to the finishing straight a little voice in the back of my head had started saying 'Come on, you can beat your Edinburgh marathon PB by over 90 minutes. Come on.'

The final sweep down to the finish line hurt. But as the line approached and I did my trademark heel click the rush of jubilation was overwhelming. 4:10:41. Heck yes.


Cheering in all my colleagues one by one after finishing just made the day. The heroes the lot of them. 5 new members of the marathon completers club. A new PB for me.

Pros: beautiful views, awesome medal, only £30, free race photos, friendly race, great marshals
Cons: poor finishing t-shirt, ran out of drinks by the end, could have been more food for finishers, hard mentally when the half marathon runners peel off
Likelihood of doing the Kent Costal Marathon again: 75%

To find out more about the race: http://www.thanetroadrunners.org.uk/events/kent-coastal-marathon-and-half-marathon