It is famous for being the fastest marathon in the world, where the great and good come and aim to smash the barriers of world records. This year there was once again talk of if the elite men would get nearer to the seemingly impossible 2 hour mark. Could they run a sub-2 marathon?

While the elites were at press conferences and limbering up in hotels I too had just arrived in Berlin also looking for a fast marathon time. I'd run a massive marathon PB at the Kent Costal Marathon 3 weeks before Berlin but the course was undulating so I suspected there might be a chance of another PB. 4:10:41 - that was the number to beat.

In the back of my head was a nagging voice telling me getting a PB was great but what if I could cross the line of 4 hours? Just like the fastest in the world could I cross that magic threshold that for me took me into the seemingly impossible. 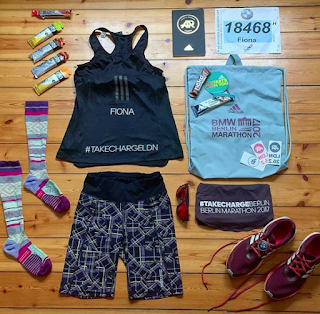 Long time readers of my blog will know that when I started running 6 years a go I couldn't run round the block. Never mind the block I couldn't even run to the end of the street. I remember the first time I ran a continuous 1km without stopping: I thought I'd made it. I ran my first marathon in Edinburgh in 2011 because I wanted to be one of those people. I wanted to be a marathoner. It was really tough but I also remember grinning ear to ear throughout because I was doing it: I was running a marathon. I finished that day in 5:47: 45 which I continue to be so proud of.

Now here I was in Berlin contemplating if I should say the words out loud. On race morning at Racebase (I was out with my Adidas Runners Crew including so much incredible hospitality laid on by AR Berlin like a hub near the start line called Racebase) as I left to go to the starting pens I finally admitted to one of the other Adidas Runners why my stomach was in knots: "I want to run a sub-4." Eeek. Now I'd said it out loud! 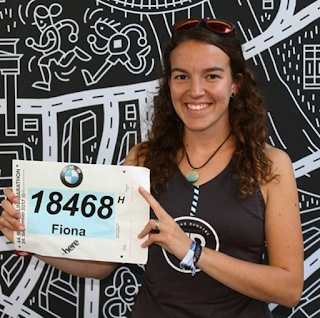 The marathon course in Berlin follows most of the major city sights and sees 45,000 runners tackle the distance. The course was great, really flat, interesting, incredible support from the crowds and really fun running in a cool city like Berlin. However that morning it was drizzling and my feet were soaking after 10 minutes. It's also been a really long time since I've run in a big race and I'd forgotten logistics like how long it takes to cross the start line (over half an hour!) or the fact the queues for the loos just don't seem worth it. I also really believe that plastic cups in a race is the worst thing ever. It's not better for the environment than bottles, it's so hard to rehydrate using them and I kept getting almost rugby tackled out the way as I attempted to enter and leave the water stations.

And here comes the big confession: as soon as I started running I knew I was having "one of those days". Sadly not the magic ones the other kind. The kind where everything hurts and it feels tough straight away and you need a couple of little cries to keep you going. The first 15km were sore but ok. Physio straight after the marathon diagnosed I have tendonitis in both my Tibialis Posterior - a muscle deep in the calf that runs from your inside ankle up your leg. So from the first step my ankles really hurt. But this was not my first marathon. I persevered. And then something shocking happened at 15km - I hit what I would describe as the wall. At 15km! What was going on? My earlier progress for the last 15km felt like it was slipping backwards as for the next 5km I slowed right down. I couldn't drag my pace up.

Then everything changed. I got to the half mararthon and the 4 hour pacer laid on by Adidas passed me. And I thought "I've got to hang on. I've got to." So I did. 5:41min/km is an ok pace for me to sustain at 5km but for that second half marathon it was a tough ask. I reasoned with myself that I'd finish quicker if I clung on to the pacer than if I gave up. I also made a deal with myself: running sub-4 would be amazing but more amazing would be to try and run a marathon without taking a walking break: something I'd never done before. As the km ticked by I made mental stages for myself: 30km (I was on track for a 30km PB), 33km (next time I'd take an energy gel), 37km (the cheer station organised by AR), 40km, done. 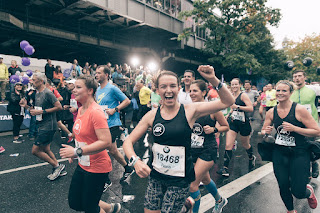 Running with the small group around our 4 hour pacer Annika was amazing. They were inspiring, encouraging, helped me laugh and even helped me translate the word all the supporters kept cheering: Jawohl! Bravo! When we hit 10km to go I begun to think: "Well I can't give up now, I've put in so much work to get here!" The cheer station at 37km was incredible. It's rare I run a big race with no support so to suddenly be hit by this amazing group of people cheering their lungs out for me because I was part of their Adidas Runners crew was really wonderful. And it was the nudge I needed. I was clinging on.

With 4km to go my knee starting tracking slightly off so every other step I felt a bambi-esque wobble. Cling on. I can do this. Passing 40km I'd developed a nervous watch twitch. Timing wise it was still on but it would be tight. I definitely couldn't slow down at all or I'd miss it.

And then with a km to go you round a corner and the Brandenburg Gate is there. It's beautiful and huge and you can see the stream of runners running through it on their way to the finish line. So I sped up. Through the gate, final 200m, final watch check, speed up, heel click on the finish line because I did it, stop my watch. 3:59:39. And then I cried my eyes out. 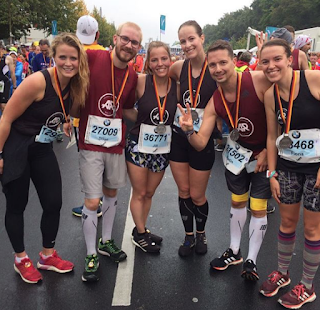 Standing just past the finish line Carola, one of the wonderful sub-4 crew, comes over to me and wraps my very sweaty body into a massive hug as I cry and cry and cry. She too has smashed her PB and the grins from our crew at the realisation we crossed the magic 4 hour line is the most phenomenal feeling.

Back at Racebase the party has started. Of the amazing and inspiring runners that I came out with, 20 of us came over from Adidas Runners London, there are more PBs than I can count, 2 of the girls have run sub 3:30 meaning they've qualified for Boston, the Speedster has smashed a new PB sneaking under 3:15, 3 of the lads have PBed between 2:58-3:01. But something more important than time chasing has happened: we've come together through this crazy, mad thing we do and formed a community. We're bonded by those 42.2km we faced. We're as excited about their race as our own. And because it's one of the World Marathon Majors, we are mostly excited to have 'done Berlin'. Been there. Done that. Got the medal. 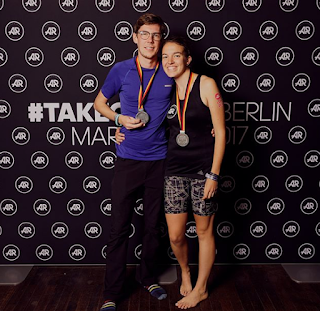 I can't thank the AR Crew enough for not only giving me the opportunity to run Berlin but also the week in week out support and love I get from them at Friday morning sessions. The interval sessions I go to with AR have really changed my running and have also given me a great group of friends in London. Wonderful weekend. Wonderful crew. Wonderful to be able to say: I ran a sub-4 marathon. Gulp. Crew love. 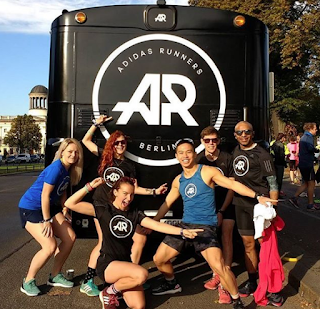 Pros: World Marathon Major, city centre course, atmosphere, the crowds, warm up activities (expo, shakeout run etc) are all great, great medal, very flat
Cons: not enough toilets (CLASSIC!), poor water stations, not many gels on course (and you can't buy the gels on course in the UK so can't practice with them beforehand)
Likelihood of doing the Berlin Marathon again: 5% - not because I didn't enjoy it just feels like a 'Been there, done that' kind of race.
But likelihood of running with Adidas Runners again: 100%++++