Right - if you're a non-running reader of my blog let's get something clear: I'm not talking about the no clothes kind. In the running community, streaking is what we call running continuously day after day without taking a break. While traditionally this is seen by some as injury invoking, others view it to be fundamental to their strength, love of the sport and ability. The incredible Ron Hill has been streaking since 20 December 1964, a total of 18,964 days. That includes a day after having surgery on his foot and another after a car crash. Streaking requires resilience. Or stubbornness.

If you want to get hard core you can join the Run Every Day crew. To qualify you have to run at least a mile a day every day and have managed it for at least a year. If you succeed, you have the chance to be one of an elite international crew of just 52 runners. Real exclusive territory.

I find December hard in terms of exercise. It's too cold to swim. It's too icy for cycling further than about 15km and running is hard after you've eaten too many mince pies. Starting running challenges in January seems too mainstream and somehow makes me feel like less of a dedicated runner. So as the 1st December rolled round I decided I was going to start a streak.

I set my own rules: for it to count it had to be at least 3kms and I had to get it in before midnight. Add in a busy diet of Christmas parties, handing in my notice at work (so working somehow ten times harder) and niggly injuries and suddenly streaking even for just a month seemed like a tough prospect.

The first few days were relatively easy - I discovered the key was planning, committing and being prepared to be a party-pooper. Day 7 was tough - my legs were exhausted and not helped by a hard-core day at the NHS knee clinic working on strengthening a slipped knee-cap about 2 months a go. Day 10 saw me get my 5km time down to under 25 minutes - the first time in nearly a year. Day 12 saw my first late: a 10pm 3km run round the blocks at home after Press Night at the theatre.

And suddenly I'd made it 2 weeks. I can't really believe it. I feel like a real streaker! Christmas is in sight and I have lots of parkruns to help me rack up the streaking sessions. Right now I'm excited to see my body get stronger and tougher while also putting in the hours of strength training to support the strain on my body. I'm excited to continue fitting in my runs - choosing to make time for myself every day. Long may the streak continue! 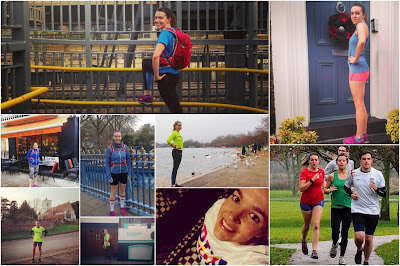