We're driving down to Dorset on the Friday evening after work before racing on the Saturday and I can think of no good reason as to why I've entered the Ultra+ over a shorter distance.

I'm fortunate enough to be an Ambassador for the brilliant Runderwear and when they suggested over the summer a team outing to their neck of the woods and a chance to explore the Jurassic Coast I thought: Brilliant! Endurancelife is a race series that aims to cater for all abilities and as such their events start at 10km and go up to UTMB qualifying races. I've got, as I keep joking, too many UTMB points so that was no factor in my decision making process. The race is also a series of laps for anything beyond the marathon so by going longer I wasn't getting a better view or route.

Simply: I was pretty stubborn about a woman needing to sign up for the hardest event. I waited for one of the other girls to sign up. I thought at one point I might have persuaded Jordan AKA Project Marathon Girl before she instead took on Ultra X's Jordan race.

So it was left down to me, in my head, to represent the girls.

The Ultra+ is run along the beautiful Jurassic coast which, while not particularly high, is continually undulating along the cliffs. This means the 73km race manages to sneak in an impressive 3,250m elevation gain. 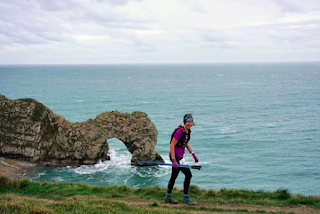 The race day itself was utterly beautiful: clear blue skies and incredible views. I spent most the day in just a t-shirt which given it is run on 30 November was remarkable. The course is pretty technical in places and it's definitely one to take poles on. It was brilliantly marked and bar one HORRENDOUS churned mud-bath of a farmers field where I saw someone loose both his shoes to the mud, it felt so well chosen as a route. We even passed a trig point on route!

It's slightly demoralising to be on a route that picks up and drops off those running shorter distances but it was actually really nice to be, for the first 50km or so, with the shorter 'Ultra' runners as I got chatting to some great girls on course.

The highlight of the day was my amazing friends being there to cheer me on: my friends Claudi and Matt drove all the way from London and back on the day to cheer and the legendary Speedster clocked up 30km through running around cheering and taking pictures. 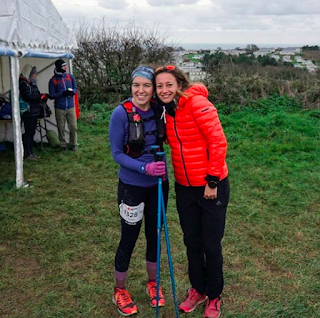 Personally, I really enjoyed the loops. I didn't expect to say that but I've not run with a headtorch for longer than about an hour so the three hours I ended up in the dark was made much better by the fact I'd essentially recced the race route during the race.

As far as ultras go, it was a great day out. I personally think the aid stations could do with some proper nutrition and it seems a little unfair if you are UTMB points hunting that the race is worth the same points as Country to Capital after the Ultra+ was downgraded this year from 4 points to 3 but in terms of fantastic season closers I'd really recommend it.

Thanks to Runderwear for the place and kit. 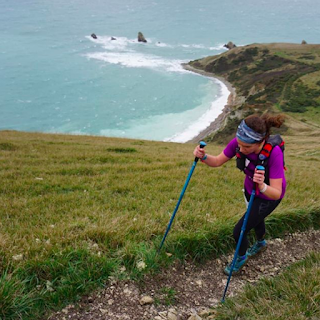 To find out more about how to enter the 2020 race go to:
https://www.endurancelife.com/dorset
Labels: Dorset Endurancelife Jurassic Coast race Runderwear ultramarathon