I'm feeling like quite a massive idiot as I say this phrase to my friend in a coffee shop the week of Outlaw X. And I'm not necessarily feeling as confident as the phrase allows.

Two years a go, I completed a long-distance triathlon - traditionally known by the brand name 'Ironman' - and to celebrate two years since I'd crossed that finish line I'd decided to take part in the inaugural Outlaw X at Thoresby Hall - a 70.3 distance triathlon that would involve swimming 1.2 miles, cycling 56 miles and running a half marathon (13.1 miles) to finish.

Being pretty passionate about ultrarunning currently means my weekends are taken up with long hours in the mountains and on the trails and my previous ability to swim and cycle has somewhat fallen by the wayside. For my birthday this year my parents bought me a 6 week 1:1 set of swimming lessons with the guys from Turner Swim. I learned absolutely loads and it reignited my enjoyment of swimming because I suddenly starting seeing improvements.

With that in mind, I decided I had 5 goals for Outlaw X:
1. Complete the race in full
2. Enjoy the swim
3. Run a sub-2 hour half marathon
4. Remember the joy of completing that full Ironman two years ago
5. Smile. Lots. 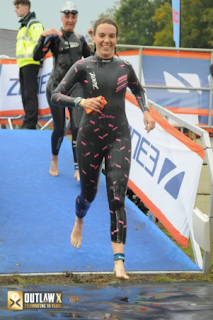 The lake at Thorseby has never hosted an event before so we were the first group of people to ever race there which was a really special feeling. The lake itself was really pretty cold, but the race is at the end of the season in September so it makes sense. The swim was beautiful and I felt so strong the whole way round. I was in an all female wave which I really enjoyed and at one point I was admiring a really brilliant woman next to me only to realise she was swimming at the same speed as me. All those Turner Swim lessons had paid off and I came out of the water in 46:56, the fastest I've ever swum the 1.9km distance. Massive grin upon exiting: tick. 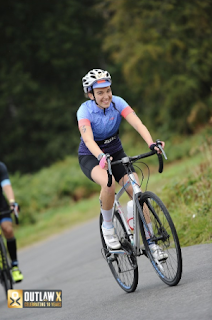 After that it was in to transition to get my wetsuit off and bike kit on. By this point the clouds had begun to loom overhead and as I wheeled out of transition, the rain began to fall. The bike ride took us through the beautiful rolling Nottingham countryside - unfortunately the weather was filthy and I got pretty cold on the bike and found some of the hills a little scary in the driving rain. But it helped pass the time and remind me how impressive the feat was of completing a half Ironman and the gorgeous views from the tops of the climbs made it worthwhile. I felt pretty strong on my new bike, an insurance payout that was quite the upgrade after my last bike was stolen in central London.

In total I completed the bike in 3:43:13 which I'm pretty pleased with given the weather and that cycling wasn't my key focus in training for the race. 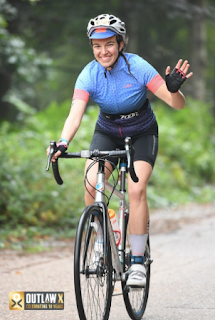 My favourite thing about triathlon is the fact that after the swim and bike have been survived I get to my absolute favourite discipline, and get to have great fun overtaking - the run.

The 3 lap course took us around the gorgeous Thoresby Park. It was unexpectedly a light trail underfoot which given the pouring rain was tougher in road shoes than it ought to have been but did provide some cushioning to my slightly sore legs. The half marathon itself I really wanted to do in under 2 hours which once I started in the rain begun to feel like a bit of a tough ask but I got in to it and was hugely helped by my friends and family finding me on the run course and cheering me on, including the Speedster who had finished in a bonkers sub-5:30 time. I ended up overtaking 101 people on the run with the 59th fastest time of the day. Definitely shows running is my strength!

I ended up making it round the undulating course in 1:55:29 and came to the fab finish funnel smiling from ear to ear. The funnel was long which made for a really fun sprint finish and as I crossed the line I finished in my signature heel kick in a total time of 6:38:38 - less than half of my Ironman time which given I gave this triathlon just 8 weeks of specific training I'm delighted with. 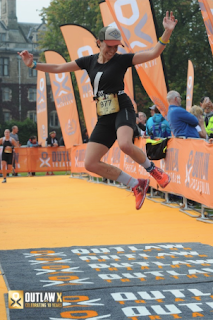 All in all I thought Outlaw X was a fantastically organised event with a wonderful course and in particular a gorgeous swim. Set at a great time of year by being later on so you can train over the summer and for a much more affordable price than an official Ironman - it's really worth looking in to if you fancy the challenge of a middle distance triathlon next year.

To sign up for 2020s race - go to https://www.outlawtriathlon.com/outlaw-x/overview/ 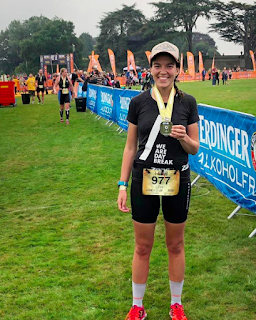