There are certain things in sport that truly scare me. Open water swimming for longer than an hour. Riding my bike downhill in the rain. Running at pace and holding it.

Certain times scare me too. Trying to go sub-23 minutes at parkrun (managed it 4 times). 1:45 for a half marathon (managed at the Big Half this year). Sub 4 for a marathon. Those times where you're not quite sure you can do it, you know it is going to be gritty and painful.

Certain distances scare me. I've become a bit stuck in my opinion that 30km is a comfortable long run and anything longer is a bit scary. But really 60km in the mountains scares me. 100km terrifies me. 42.2km on road is scary.

Now combine those three with 6 months of solid training and three goals that all involve PBs and I was pretty scared going in to the Stockholm marathon. Calm and confident but scared.

When I signed up for Stockholm I do so for a few reasons: I wanted a long enough build up time after Country to Capital 70km in January and I didn't want to run Edinburgh again the weekend before. Liverpool and Windermere are around the same time but seemed too hilly after some research so Stockholm became my A race. They changed the course in 2019 to make it a one lap course and it looked like a great city to run round. 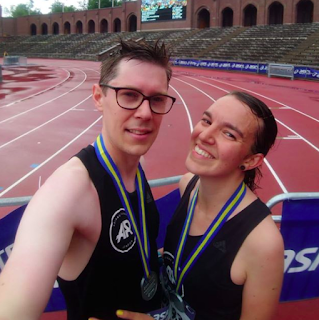 About three weeks beforehand I came across a horrifying upload on Strava of the course with over 500m elevation. Not quite the flat, fast course I was looking for. But we play the cards we are dealt and come race day my head was in the game.

Race day was my 6 year wedding anniversary with the Speedster and as a present he'd offered to pace me round. We've never run a marathon before so I was excited and knew he'd help me want to deliver my best performance with him by my side.

The race is super well organised, it starts very centrally and some good planning meant our AirBnB was a 10 minute walk from the start meaning we could rock up about 15 minutes before the start and didn't need to use the bag drop or loos. Great for keeping me calm. It's a big race with over 16,000 entrants which gives it all the feels of a big city marathon and the course was so well supported with great cheer points and fantastic crowds. There aren't gels on the course but I like using what I've trained with so that didn't bother me and there were plenty of water and energy drink stations.

We went out well and I quickly settled in to my 5:06/km pace. The race starts at 12 which had made things like fuelling pre-race a bit weird but nice to avoid the crazy early alarm clock. There are lumps and bumps on the roads right from the start and I was feeling slightly tense even by 3km so switched my watch face off. Pacing was on the Speedster for this one and I'd just have to dig really deep.

The course was beautiful and though it was quite humid on the day it wasn't too sunny which made for a good racing temperature. We passed 10km bang on goal B in 51:33 (said in hindsight as my watch was off). I was definitely struggling. My stomach was unhappy and I couldn't work out whether I wanted to throw up or if it was just the pace. The Speedster was really willing me to up my pace but I had hit my limit on that day and we passed half marathon in 1:49:35, the only split I got given on the day. I knew at the half that that meant running 3:39 and achieving a GFA (a London marathon qualifying time known as a 'good for age') was still possible if I could hold on. Quick loo stop at the half marathon to check I didn't need to throw up and we were off and I was ready to grit in.

And then the rain came.

Buckets and buckets of rain. Torrential downpours that made me so wet I could hardly see. The roads in Stockholm are pretty narrow and quite soon we were running through small rivers. I hate having wet feet as I'm really prone to blisters and my toes throbbed angrily as I sloshed my way through the course. And at 34km you hit what can only be described as a bast*rd of a bridge: Västerbron. It's massive. That was the point where I just decided I was going to be proud of the gritting in. I desperately wanted to walk. My head was screaming at me to quit. But a tiny stubborn voice in me kept going. Knowing the big goals had gone even though on a different day and a different course I'd have got them. But still refusing to quit.

From 34km to the end it was a real slog. I was totally wiped and even had to force an extra gel down just to convince myself that this was just what trying to run at this pace felt like and that there wasn't anything else I could do.

I can't really tell you what happened in those last 8km. I honestly wanted to quit with virtually every step. I think if the Speedster hadn't been with me I probably would have done. Turns out trying to run a fast marathon is hard. No matter what your fast looks like.

With 1km to go the stadium came in to sight that signified the finish line and my legs could tell it was nearly time to stop. They got a bit keen on that thought though and started trying to buckle under me so when I got told to kick I honestly couldn't. I love a fast final km, a dig in and give it everything but I'd left everything out on the roads and it took all my energy to keep myself upright. As we entered the stadium I could see the giant clock ticking towards 3:45 and knew I wouldn't get a sub-3:45 time and genuinely didn't care. When I ran Chicago in October I thought I'd run the best race of my life and came away with a 3:52 time. Today I was going to take over 7 minutes off my PB on a tough course. 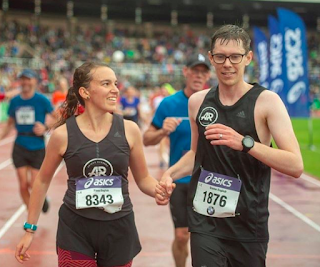 With 50m to go the Speedster grabbed my hand and we crossed the line together before I cried my eyes out and let my legs give way. 3:45:37. Utterly delighted. Gave it absolutely everything.

I've not had many days where I've missed my main targets and come away thrilled but on this day that was the outcome. You can't pick the weather or how your stomach feels on the day or what might happen on the course but you can find that inner strength and grit. You can give it your all and if you do that - how could you be anything other than pleased with the outcome. 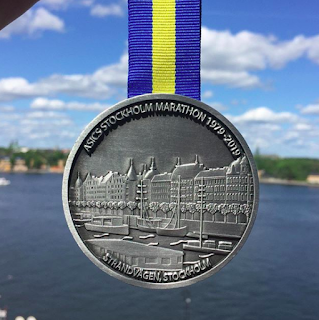 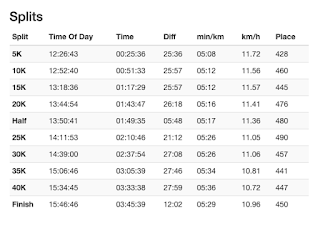