I have just closed the back cover of Jonny Muir's The Mountains are Calling. I deeply exhale. I shut my eyes and am taken back to three weeks ago, in the middle of the Transalpine Run 2 Race, standing on an exposed ridgeline where, after hours and hours of mist, the cloud had cleared for the first time to reveal the most literally breathtaking views.

My heart is full because for me: the mountains truly do call my name.

It's May. I've just persuaded my friend Libby that while she loves road running she's got to give the mountains a try. She pulls a face totally unconvinced. It takes me two weeks but I somehow persuade her to sign up to be my partner at the inaugural TransAlpine Run 2 race: an entry level multi-stage ultramarathon across the Austrian alps from Germany to Austria. Day One starts in Garmisch-Partenkirschen (known, my mother informs me, for it's setting for skiing events) and over 43.6km you cover 2,471m ascent and 2,327m descent on the journey through the border and in to Nassereith in Austria. On Day Two you run again, covering 27.2km, 1,323m ascent and 1,377 descent as you leave the Austrian border behind and head deeper in the Austrian Alps finishing in Imst Austria. 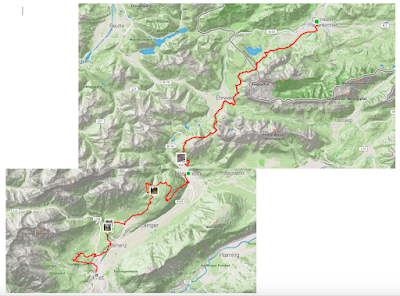 When we arrived on day one I have to admit, I was pretty nervous. Libby is a faster road runner than me and she'd been working on her uphill climbing by running up the stairs at Guys and St Thomas Hospital. That said, I knew I had some good endurance having run ultramarathons before and having spent most of my life in the hills (thanks to my Dad). 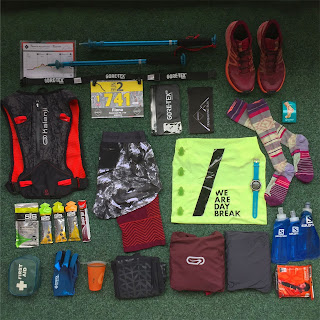 Day 1 was really tough: technical climbs, relentless uphill, endless switchbacks and one particular section that was so horrendously muddy underfoot that for every step forward you slid a good metre back. It also was drizzly, and quite cold and brutal on my legs. But then you'd get to a long runable section in the deep forest and hit a clearing with remarkable views and it would be, well magical. 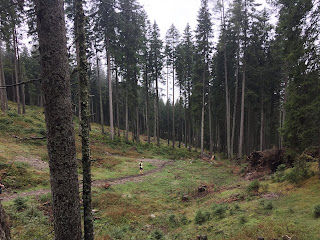 And, as much as I may have worried about holding Libby up, we both had our strengths. On the uphills she was like a train powering relentlessly up. On the downhill I'd fly down with no fear descending rapidly. But more than our strengths, running with another person creates a team spirit you so rarely find in running. It's not about you anymore. In races I've done previously when things get hard your head thinks 'I should quit now' or 'I can't do this' but in a team race where you are disqualified if you're more than 2 minutes from your team member there is no space to think that. It's not about you anymore. It's about the team. And so we did it. It took 9 hours and 17 minutes and ended up being the slightly further distance of 46km but we made it. 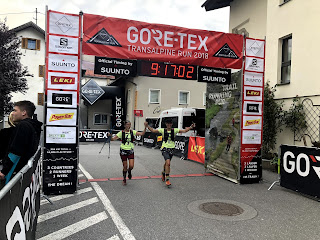 The hardest point came on the morning of Day 2 as I attempted to crawl out of bed my legs buckling like Bambi underneath me and contemplating the prospect of nearly 30km of the relentless Alps ahead of me but once we were standing on the start line really it was never a question. How could I possibly let my teammate down? Virtually straight away we got to a section of over 2 hours of uphill climbing. Turns out the Alps are pretty steep and pretty high. My legs were screaming and my lungs were fit to burst but as Libby powered alongside me and encouraged me it just wasn't a question of stopping: we were going to make it. 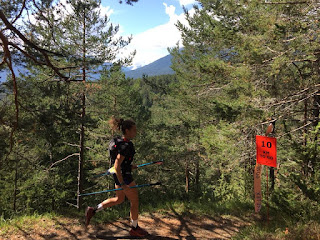 The second day the weather was much better: we got some actual sunshine and a much more runable day. The middle of the day saw a huge descent in to an almost gorge section which led to then a burning climb out. The final climb of the day was brutal but by that point we were just so thrilled at the fact we were ahead of the cut off times and the views were remarkable. 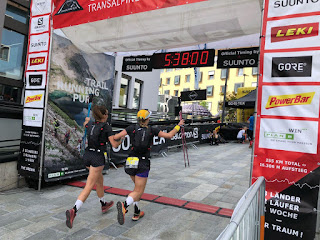 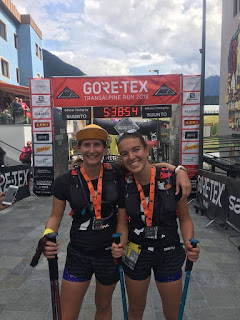 A couple of weeks on it feels quite surreal to have covered a total of 73.9km running, 3,864m ascent and 3,616m descent in the two days. It is like a wonderful, painful, surreal dream. And it makes me more confident about future challenges. My biggest lesson? Together we can accomplish so much more. I'll take that team mentality back in to my individual training and I have no doubt the strength I've learned in the mountains, will transform my racing on the road.