Triathlon | The road to Outlaw: Becoming an Ironman

Some dreams seem so impossibly large they seem laughable. A year ago that would been my opinion of completing an Ironman triathlon. In fact I used to laugh at what a ridiculous idea it was. To be clear: running a marathon is a huge, impressive challenge. So running a marathon after you've swum 3.8km open water and cycled 180km is, quite frankly, mind blowing.

The Speedster, my husband, had a dream to complete his first Ironman before he turned 30 so when my parents said they'd like to buy him something really special for his birthday last year I suggested race entry to Outlaw, voted the best Iron-distance triathlon in Europe for beginners. Those who know me will know I firmly believe anything my Speedster husband can do I can do (albeit probably slower and worse!) So a few clicks later I found myself also having signed up to my first Iron-distance triathlon.

A week after signing up for Outlaw, I dislocated my knee. Queue the long road to recovery. I used December to rediscover my love for running through streaking and then 1st January came round and I got ready to dig deep and commit 8 months to the biggest challenge I've ever signed up for. I followed Don Fink's Be Iron Fit guide and I'd really recommend it if you are considering the challenge. Following a combination of the Intermediate training plan for the running and cycling and Just Finish training plan for the swimming I cracked on and committed to up to 15 hours a week training.

I'm not going to lie the last 200+ days have been incredibly hard. Week in week out of committing to training plans, and diets, and sobriety. But bobbing up and down at the start line on Sunday I have to admit it was worth it. I'd barely slept for the week leading up to it, so convinced was I that I was going to get disqualified for not making the cut off times. But I was also full of excitement that the months of training was finally here.

3.8km in 2 hours is tough if you swim at my speed. I taught myself front crawl in January. I describe myself as someone who can swim 'to save my life' but not a stroke further. This would be the biggest physical challenge of my life. Course wise the best bit of Outlaw in my opinion is the swim: a beautiful calm rowing lake that isn't too deep (and therefore not too cold) and a simple one lap of the lake. It's a nervous swimmers perfect Ironman swim. I had several glorious epiphanies on the way round: firstly I realised I could do this. Swish, swish, swish, breath. Swish, swish, swish, breath. Front crawl: not exactly mastered but accomplished sufficiently to see me through the swim. Several hymns sung through in my head over and over again and channeling the gloriously inspiring Diana Nyad I was at halfway. The turning point was delicious. Checking my watch and I was on track for a sub-2 hour time. I can do this. I can do this. I can do this. Many swishing strokes later and passing the boat house I was there, hands of the charming volunteers helping guide me out of the lake and on to my feet. 1:42:37. Made it. With over 17 minutes to spare.

In transition I had made the decision to entirely change and whipping tri suit off and cycling kit on I felt refreshed and ready for the long ride ahead of me, 45km further than I'd ever ridden in my life. As I claimed my bike and made my way to the dismount line the roar of the crowd and in particular my incredible group of friends was bordering on overwhelming. In a good way! 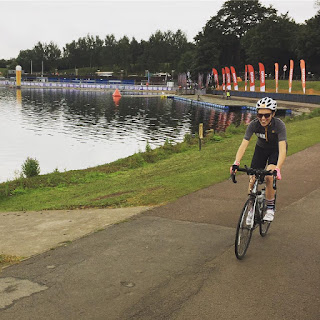 Out on the bike I was ready to test out the weeks of riding practice I'd put in. Wonderfully I'd tested the course out a couple of weeks prior and finding myself back on it was like a meeting with an old friend: comfortable, exciting and welcoming. The distance ticked along and even the evil hill at 81km could not destroy my spirits. Hoards of cheering supporters all sporting Team English t-shirts and enormous smiles surrounded me. Hill accomplished. Felt stronger than ever and passed the 135km mark making this the longest bike ride of my life. And then at 148km I made the most enormous mistake. I noted that I had a marathon left to ride. Which therefore meant the distance I would have to ride would be the same as the amount I had to run when I got off my bike. And once I thought that I couldn't un-think it. I'd broken the golden rule of long distance racing: I'd fixated on a future discipline while still not having mastered the current one. 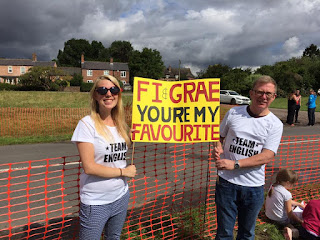 And that is when I had the joy to experience 'bonking'. Ridiculous word. Ridiculous feeling. I just ran out of energy. I happily could have stopped on the side of the road and had a lie down. I felt sick and light headed and just couldn't imagine the idea of cycling for another hour and a half plus. The thought of my wonderful family standing waiting for me at 165km meant I had to carry on. No matter how little I wanted to. It took me 20km to realise how grim it had got. When I realised I ate three cherry date bars in quick succession and suddenly felt like I was breathing again. Through 165km, past my incredible family cheering their hearts out and suddenly I was back on it. I can do this. I can do this. I can do this. 7:14:14. Bike complete.

Hitting the dismount line was incredible. No need to rack my bike; some gorgeous marshal whisked it away to do that for me. Bike kit off. Running kit on. Let's do this I tell myself. This is what I came for. This is the bit I like. This is the bit I know I can do. Let's run a marathon. 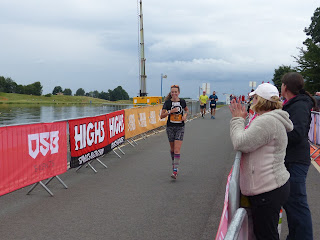 I have only run one marathon before. It was 2011, I was nearly two stone heavier, I'd only just learnt to run and I managed to make it round, incredibly painfully, in 5:47. So in the back of my head as I headed out on the run I knew there was a chance I could do something a bit mad: I could achieve my marathon PB in an Ironman. I set out feeling really strong. I hit 10km in just under an hour. Out towards the long out and back along the river I set my mind on the challenge ahead. I was rewarded with two glorious moments. Firstly two of my awesome friends cycled alongside me for 10km belting out the Hamilton soundtrack through little speakers. "I am not throwing away my shot". Secondly as I hit the bridge just before the turn around point I ran in to the Speedster coming the other way, 10 miles ahead of me. It was the most heart lifting moment. Totally unexpected and just fantastic. Quick kiss and off I went again. A bit more pain and I made it to the half marathon in just over 2 hours 10 minutes.


About 25km it started to really hurt. I adopted a bit of an allowance for walking. By 32km it was burning. And then I noticed the time. I had 10km left to run and if I could run that in 1 hour 20 minutes I would break 14 hours on my total Ironman time. When my brain was craving running away that was the incentive I needed. It was without a doubt the hardest 10km of my life. Without my beautiful support team out on the route I'm not sure I'd have made it. I was mentally bust. But slowly, but surely I ticked off the kilometers. The final three kms were unexpectedly the hardest. The darkness of running away from the grandstand for a final 5km loop was so tough and coupled with a bit of light rain I had a little cry. But I can do this. So I did. Keep on running. 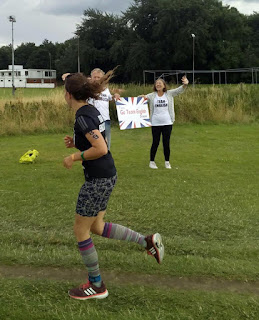 Suddenly I hit the 1km to go sign and the relief started surging through my body. 500 metres and I started to be hit by the wave of sound from the supporters at the finishing line. 200m and I could see the finishing carpet and just like that I was there. High Fiving the glorious Team English down the finishing line, 10 heel clicks for good measure and breaking the tape. Because everyone who finishes Outlaw is a winner.

"Fiona: You are an Outlaw."

And a sub-14 hour Outlaw at that. Official time: 13:57:04. Before starting my dream goal had been to break 16 hours. And here I was staring at a finishing time that started with a 13. And a marathon PB by over an hour. I couldn't be more overwhelmed by how the impossible became possible. I'll cherish that feeling forever. I can do all things. 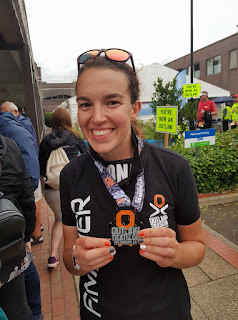 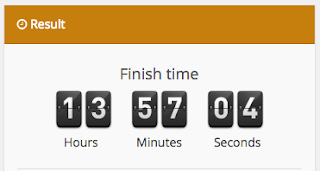 Run - 4:42:22
Finishing position:  86th female
Pros: genuinely the friendliest race I've ever been in, welcomes beginners, swim course is fantastic, not too hilly, great feed stations, cheaper than many other Ironman distance races, cracking rucksack for entrants.
Cons: still expensive (£300+), multi-lap run is hard mentally, more toilets needed (classic), quite low on 'normal' women entrants (expect elites and men!). Is a con allowed to be that an Ironman is a REALLY LONG WAY?!