It’s a hard concept to explain Wings for Life’s World Run because it’s like no other race. The finish line is moving and is, naturally, attached to the side of a car that F1 legend David Coulthard is driving. With me so far? The car sets off 30 minutes after the runners and speeds up at regular intervals until everyone is caught. Oh and while we’re racing at midday in Cambridge, there are races setting off round the world at the same time so that you’re competing with runners running everywhere from the UAE desert to the Milan countryside. Got it? 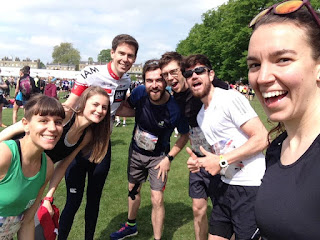 After competing last year and having a whale of a time it was pretty easy to decide to sign up this year. Last year the temperatures soared to 30 degrees and I managed a gritty 16.83km. This year I was in it for the fun and atmosphere of the event but I couldn’t help but notice that the distance predictor gave me the teasing estimate of a half marathon if I could run it in 1:52. I’ve got a PB of 1:50:52 so what was there to lose?

We set off at midday to the usual fanfare of confetti canons but the limited 4 timing groupings at the start made the first 2km painfully slow and full of stops and starts. My great parkrun friends, Tom, Roisin and Gareth, had chosen to run at my pace which helped me decide to push for the half marathon – even though it would be a stretch. Out of the city centre after the long slog up Castle Hill, Cambridge’s only hill, we were out in the countryside and just like last year the support from the locals was exceptional – cheering and whooping throughout. A different route this year took us through a disused airbase which, just past 10km, was a tough point in the course to have no support. 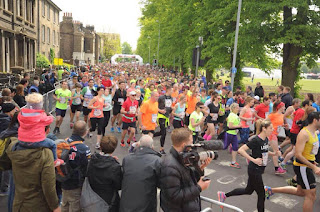 Back in the crowds and the kms started to tumble. Passing last year’s milestone felt fantastic and we adopted a run walk strategy to see us through the water stations as by this point the sun had really picked up. I’m always frustrated by a water station that gives you water in cups – it’s so impossible but the rising heat made it vital we keep drinking. Finally we hit the glorious 21.1km mark – the runners around us all cheering in delight and I’d snuck it in in a new PB of 1:50:17. Just 500m later and the car was on our tail. A punchy sprint saw us get past the 22km marker finally clocking in at 22.22km: a really victorious distance! 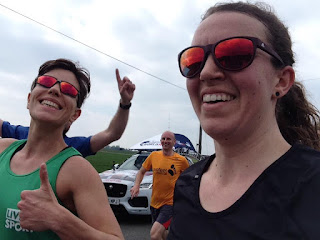 Back at the park in the town centre we cracked open the beers (or the water in my case - I’m off the booze due to Ironman prep) and settled down on the big screen to watch the race winding up around the world. Another glorious day racing in Cambridge and fantastic to be able to support my friends at all distances – from a parkrunner on crutches making it to 3.08km to the Speedster making it to 35km it was celebrations all round. And that’s the joy of Wings for Life’s World Run: everyone is a winner regardless of how far or fast you ran. And sometimes I think it’s good to be reminded of that! 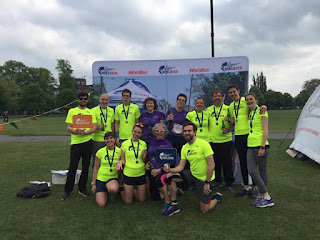 To sign up for 2018s race - again in Cambridge - go to www.wingsforlifeworldrun.com
Labels: Cambridge race review run Wings for Life