I have recently finished reading the rather exceptional and inspiring Feet in the Clouds by Richard Askwith. It is a book that documents the history of fell running alongside Askwith's own journey to attempt one of the toughest fell running challenges that exists. All in all it's brought together two of my greatest loves: running and the mountains.

I have been spending time in the mountains since I was a very small girl. My dad is the most amazing mountain enthusiast and thanks to him climbing is a huge part of my life to this day. There is no where in the world I feel more alive than when I am on my way to the summit of a mountain somewhere in the beautiful countryside.

Running is something that still feels like a new part of my history. I've only identified myself as a 'runner' in the last couple of years and it's still strange to me that a gentle recovery run nowadays is 10km not the 3km I used to do.

So when the Speedster and I decided on an impromptu trip to the Lake District, I logged on to the Fell Runner website just to check if there was a chance of a cheeky fell race inspired by Askwith's wonderful stories about fell running. And there it was: one of the oldest fell races in the UK and only a cheeky 5.2km: Rivington Pike Fell Race. Who could say no? 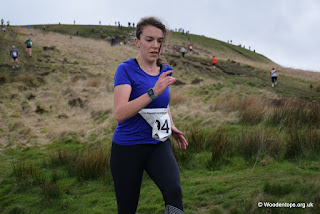 For the first time in my life I rocked up to the race late: LATE! The lovely race HQ helped us register even though we arrived at ten to but then, lack of knowledge of the area, we struggled to park and rocked up at the start line at 3:01pm. This is fell running. It starts on time. So for the first time in my life I set off a full minute after the gun. Which meant a full minute after the other 370 runners. This did have the advantage though that my sole aim became to overtake. Just 1 person would be amazing. 10 people would be incredible... Imagine if I could pip 50! 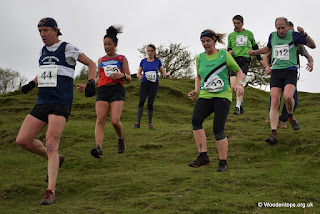 Rivington Pike is a simple up 230m, round a monument and back down - a quick but brutal race. The way up was tough and the way down was terrifying but the crowd support was stupendous and it was so much fun throwing myself down a mountain!

In just 29 minutes and 56 seconds my race was over. Celebrations at the line and adding on the minute lost at the start my official finish time was 30:56 leaving me finishing in 274th place (of 370) and 46th female of 96. So officially the top half of the women - in spite of the late start. I couldn't be happier!

Official results can be found here >> 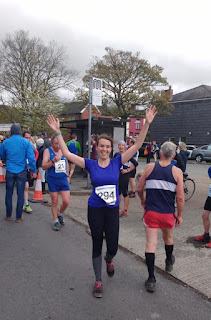