Baking | When is Bake Off not Bake Off?

As apparently are 10 million other Brits, I'm thrilled that the Great British Bake Off is back on our screens. Weeks of silly entertainment, the chance to be brutally judgmental and a staunch belief that I could bake anything in the technical challenge makes it one of my favourite shows on television.

Celebrity spin offs aside that is. And more recently TV licenses aside.

I am quite passionately frugal so the recent shock of the introduction of TV licenses to BBC iPlayer viewing was a bit horrifying. I work close to my Mum so can easily bike to hers to catch the latest episodes but still this series Bake Off hasn't felt quite like Bake Off. Maybe it's all the extra programmes that have been thrown in - personally I don't want to watch a random group of 'celebrities' basically unable to bake a simple sponge. And while An Extra Slice is a good idea (if you've not seen it it's the Apprentice style Your Fired show hosted by Jo Brand), all the comedy thrown at the show makes it a bit cheesy. The joy of Bake Off is classic British fun - feeling you are partaking in an old fashioned programme but with clever modern updates to keep our interest. And essential to that are three things:

1. Bake Off being available to all on the BBC
Because part of the vintage charm is a whole community tuning in to BBC1 in the evening and watching it with friends and family and hopefully, oodles of home baked cakes
2. Bake Off being hosted by Mary and Paul
Because they are part of the dynasty - they are the pillars of the Bake Off tower and without them it would be just another reality show hosted by minor 'celebrities'
3. Bake Off being co-hosted by Mel and Sue
Because they ask the questions that I think and they stick their fingers in the raw cake dough to have a taste - and really that child-like inquisitiveness is essential to the show. So hearing this afternoon that Love Productions had sold Bake Off to Channel 4 was sad. Mostly it was sad because it won't have the same family friendly feel on the commercial giant that is Channel 4. And also because the new relationship will launch with a celebrity special - putting the 'normal' bakers in second place. And finally because the loss of Mel and Sue from the programme will change the heart and essence of Bake Off.

Surely we should have all learned lessons from Top Gear?

The world needs more presenters willing to stick their hands in the mixing bowl. Mel and Sue - Great British Bake Off won't be the same without you. 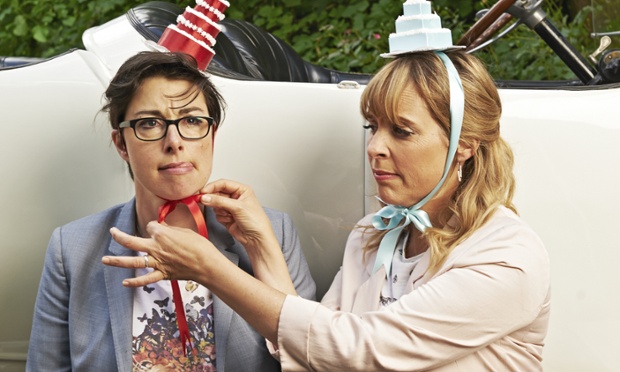