Eighteen months a go the speedster, AKA my husband Graeme, suggested he wanted to try his hand at open water swimming. I have a bad habit of trying to follow whatever he does even though I'm always at least 20% slower. But when it comes to swimming I didn't have the usual bravado. When I was an under-confident teenager I made the same decision I believe many teenage girls did - swimming was far too embarrassing and I had no desire to show my semi naked body repeatedly in public. Over ten years later the thought of rediscovering a love of swimming was not a particularly enthralling one to me. Today I am however, far more comfortable in my own skin and, since taking up running about 5 years a go, am over a stone lighter than I was in my early twenties. All in all I needed to put the swimming demons to bed. Turns out swimming is not really like riding a bike. While I happily pottered up and down the lanes doing breaststroke, the years of lessons teaching me how to swim front crawl had slipped from my brain.


Open water swimming quickly followed a few stints in the pool and I discovered a place I felt far more confident - throwing myself in to a lake on an early Saturday morning with a couple of dozen lean athletes was incredibly freeing. In the middle of a lake, encased in a wetsuit, there is a clarity of mind that I've rarely found. I think it's the same freedom and quiet you find when fell running - calm and content and free.

Fast forward to a year a go, and off the back of a surprisingly enjoyable time at the Walden Triathlon (featuring a tiny 400m pool swim) and a growing enthusiasm for watching the pros racing (the world circuit of ten races is called the ITU World Triathlon Series), the speedster and I decided to enter the ITU amateur series when it came to Leeds - home of many of the British greats: Non Stanford, Vicky Holland and the Bronwlee brothers all train in Leeds. This would involve us stepping up to the qualifying distance for the Olympics: 1.5km swim (open water), 40km bike and 10km run. It seemed daunting but achievable.

We drove up to Leeds on the Friday night and to say I was nervous would be a massive understatement. Come Saturday morning and my first view of the lake we would be swimming in I felt nauseous and was threatening to pull out. This race was super different to any we had experienced before - because the swim was taking place at Roundhay Park out of the city centre and the run was right in the centre of town, there would be a split transition. Usually all your stuff lives at one spot - so when you run out of the water and change for the bike it is the same place as when you come back from the bike and go out for the run. But in this race the transition would be split causing far more organisation than normal. After lots of discussion, and due in part to the fact that I really am an amateur I decided I wouldn't be leaving anything at T2 - I didn't use bike shoes so wouldn't need to change my shoes for the run and any drinks or gels I needed I would take with my on the bike.

Sunday morning started with a 5am rise, a difficult breakfast (I was only trying to eat some cereal and yogurt but I was so nervous it was really tough) and then a drive to the park. A quick check of our bikes, set up the night before, and we got in to our wetsuits. All too quickly our time was upon us. I was fortunate that the speedster and I were in the same wave a super rare occurrence as starting positions are usually decided by predicted finish times but here they were all mixed. The start of the swim was a pontoon start causing us to be bobbing up and down just before the race set off. A quick kiss goodbye and good lucks shared with all those around us and we were off.

I had made a conscious decision that once the gun went I would wait 10 seconds before heading off to allow for the thrashing to subside. I set off steadily on the longest swim of my life determined to finish and aiming to get round in under an hour. After all of my nerves of the weekend I had also decided I would do breaststroke on the swim. Wetsuits help you glide through the water but when you swim breaststroke you are constantly stopping that momentum forward so from a speed point of view it's a poor choice. However it's quite common for people to struggle with their breathing while swimming in a wetsuit open water and I've suffered with panic attacks and hyperventilating in the water before something I was keen to avoid.

My summary of the swim would be - it was so fun! Yes, every 5 minutes another wave of competitors would be set off so I was being constantly overtaken, but I didn't care. I was thrilled to be doing it. Half way through I remember thinking 'I can do this. I'm going to make it.' As swimming is by far my weakest discipline it has the distinct advantage that if I can survive that I can survive anything. By the time I reached the pontoon and the famous blue carpet signifying the start of transition I was buzzing. I had made it! Not only that but I'd managed it in 49 minutes - I was over the moon. It was a long run in to transition and my legs threatened to buckle beneath me for the whole 400m stretch to my bike. I managed to wriggle out of the top half of my wetsuit while running and when I reached my bike tore off the rest of my wetsuit and threw it with my cap and goggles in to my bag. I then broke every rule about speeding through transition and sat down to quickly dry my toes and put socks on before my trainers went on. I don't care if it wasted 30 seconds - it was worth it!

Sadly the event was marred with some really ill thought through organisation so to get out of T1 you and to run with your bike and all of your kit 450m to the mount line. My bag was super heavy thanks to my soggy wetsuit and the resulting slices in my shoulder caused by the drawstring are still healing. 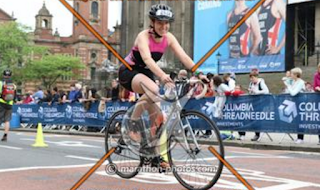 The one advantage of having none of the kit is when you are faced with a 450m long run out of T1 you zoom past everyone in their bike shoes desperately trying to run along the pavement. The start of the bike course involved a nasty climb but thanks to plenty of reading in advance I had left my bike in a low gear so gently powered up the hill. Given how my legs felt trying to run after the swim I was thrilled to discover I was super comfy on my bike. I'm so grateful to my parents who bought me my entry level road bike for my last birthday after I recently tried to compete on my folding bike. The bike ride was so fun - I was grinning the whole way round. A couple of steep hills thrown in to remind us we were in Yorkshire and a few glimpse at the speedster overtaking people thanks to the course being an out and back really got me in to my rhythm. Before the race I was aiming for sub 2 hours on the bike. I came in at 1 hour 29 minutes - totally thrilled.

T2 for me was great fun as I was in my trainers and had nothing to collect so I zoomed in, quickly racked my bike and helmet and was out super quickly. And then the shock hit my legs. As with most amateur triathletes I am a runner first and foremost so I had thought when I hit the tarmac for the run I'd be flying but my legs clearly had a different idea. My legs felt like lead and I was grateful for the 2km laps as it was easily to mentally drive myself round in such small chunks. I am also so grateful for the swell of the crowd in particular my lovely in-laws, sister and her fiancé Josh. Without them I am convinced I would have been slowed to a walk. Instead, slowly but surely I knocked off the kilometers. I'm grateful as well for wearing a GPS watch - I heard afterwards of many people who miscounted and ran too short but I simply had to keep running laps until my watch told me to stop.

As I approached the blue carpet for the last time I pushed myself and sprinted across the line where I promptly burst in to tears. I can't believe I made it, I can't believe I accomplished it. I was so proud of myself.

Afterwards I was treated with a bottle of water and the most delicious tasting wedge of orange I've ever had plus an incredible hug from the speedster and his family. I'd pushed my body round far faster than I thought possible, finishing in 3:26:12, 34 minutes faster than my dream time.

Many others have commented since the race on how poor the organisation was but I'll simply say it took me 2 hours to get a jumper and I'm grateful to my in-laws who funded my lunch while I was cashless. We watched the women's race sitting on a wall opposite the finish and the girl next to us had finished at 10:30 and had no stuff. Without a phone or money she'd been unable to find her friend she was meeting at the finish. Fortunately we'd got half our stuff and I'd shoved an emergency protein bar in my bag earlier in the day so I could give her something. But really the end of the race was dangerous and frustrating. I am very fortunate that we were there with support, without people around you I don't know what we would have done.

In terms of completing my first Olympic length triathlon I couldn't be prouder of myself or happier with the day. In terms of organisation the event was a disaster. But nothing can diminish that finish line feeling. Those tears of joy and relief prove to me in more ways than I've ever experienced before that I can say with pride I am a triathlete. And my self-conscious teenage self couldn't be prouder. 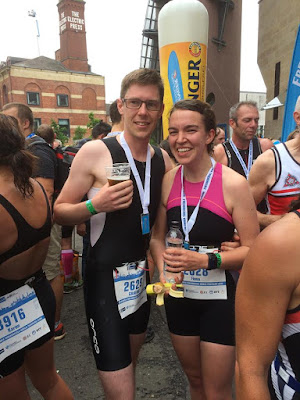